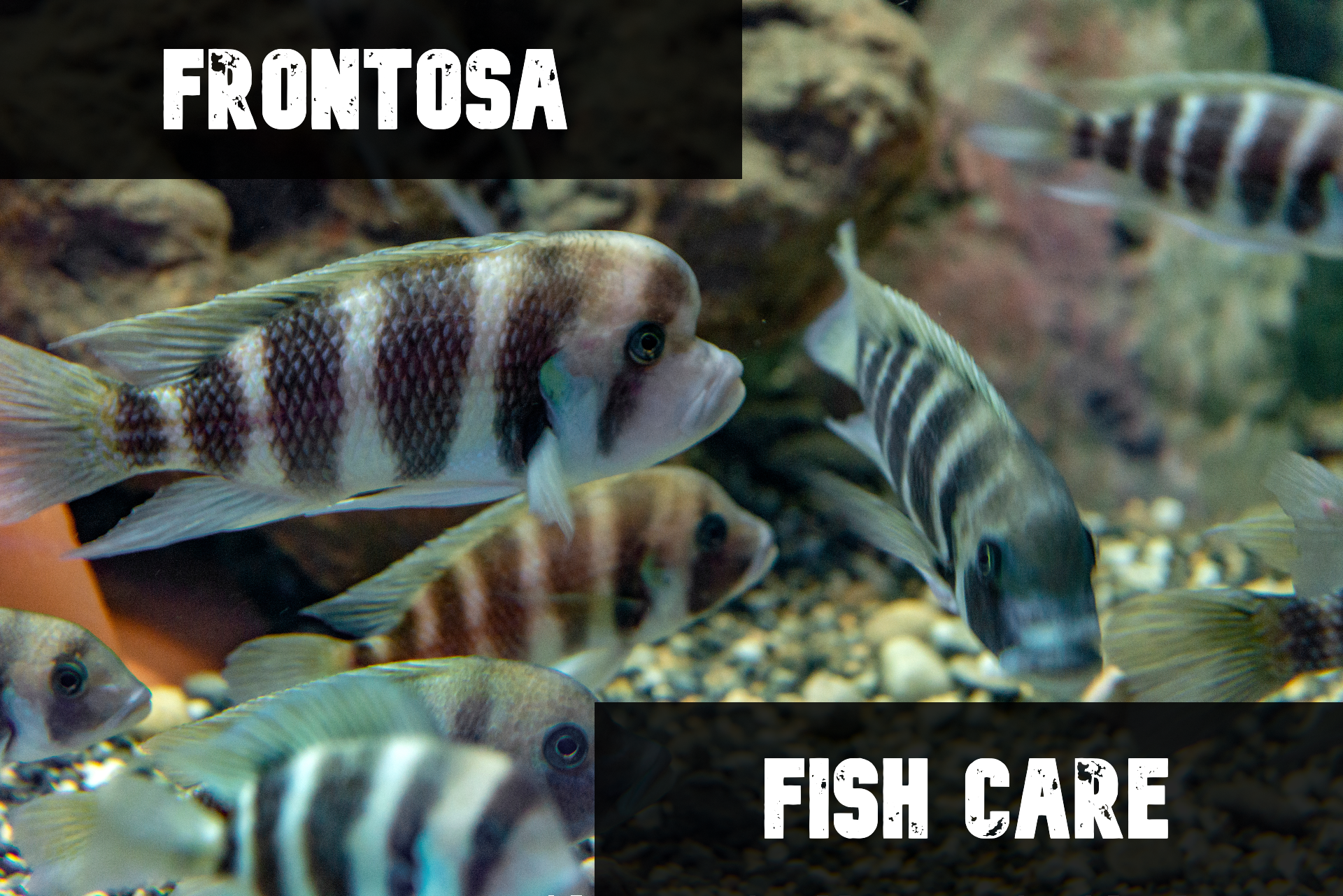 Frontosa fish are beautiful fish that are highly prized. They are known for their beautiful coloring and peaceful mannerisms. So, how do you take care of such a treasure?

Fontosas are calm fish but can be difficult for novice owners to care for. They are carnivorous, preferring to eat smaller fish that swim at the bottom of the tank. Fontosas can live up to twenty-five years if taken care of properly. For best results, Fontosas should not live with other fish.

So, if Frontosas are highly-desired, how can you make sure you are taking care of your fish? Can they live with other fish? How should you set up their tank? Continue reading to learn everything you need to know about Frontosa fish, their diet, lifestyle, and how to set up their tank.

Frontosa’s are a type of cichlid that is highly prized in the fish-keeping community because of their large size and coloration. They have a blue or white body with six or seven black bands. Some even have gold accents on their dorsal fin.

They are also known as the Humphead Cichlid because of the large hump that grows on their head as they get older.

It can be hard to determine the sex of Frontosas, but males are typically larger and have longer fins.

The Frontosa fish can grow up to one foot and three inches and can live up to twenty-five years of age if taken care of properly. In aquariums, they usually live twelve to fifteen years. They grow slowly, taking three or four years to reach sexual maturity.

Frontosias are social creatures. Some owners of Frontosas have been able to feed their fish right out of their hands. They get excited when they see their owner and become more active. Also, their tails will start to move around. But, other owners find that their fish will hide from them, so it depends on your fish.

They are generally gentle but are known to be territorial, which is why they should not live with other fish in their tank.

There are many types of Frontosa fish, depending on their location. Knowing which one you have is important as there are slight differences in care.

In nature, Fronstosas will eat almost any live food they can catch. In an aquarium setting, Frontosas eat slowly. They will eat anything from feeder fish, worms, pellets, and crustaceans such as shrimp and krill. It is important to be careful when introducing live foods into your tank because they could have bacteria and parasites.

They do not like to put a lot of effort into feeding, so it is important to make sure the food you give to your Frontosas swims to the bottom of the tank. Most Frontosas only eat what slowly passes by their mouths. Good examples of foods that do this are shrimp, krill, prawn, and earthworms.

Bloodworms are not a good option for Frontosas because they can cause bowel inflammation. They should also not be fed beef or chicken because they cause fatty deposits.

Frontosa fish should be fed two to five meals a day. Spreading out their meals keeps the quality of water higher. You should only feed them as much as they can eat within a two to three-minute period.

Frontosas are from a lake in Africa, Lake Tanganyika. They are found in the deeper waters along the lake floor. Lake Tanganyika is the second largest lake in the world. This lake has over eighty types of cichlids and twenty other species of fish.

A tank is a great environment for Frontosas because it resembles Lake Tanganyika and is a safe place for them to live.

For an adult Frontosa, their tank should be a minimum of 70 gallons (265 L). Since Frontosas need to be in groups, it is better to have a two hundred-gallon-sized tank (750 L).

Having sand or small gravel substrate in your tank will help keep up the tank’s pH. Frontosas like to move the sand around also, so it will create a nice addition to their home.

The lighting in the tank should be low because Frontosas live in low lighting in nature. Harsh lighting can also cause stress to your fish.

Also, Frontosas jump when they feel stressed or threatened, so a secure lid on the tank is a must. They do stress during tank cleaning, so it is a good idea to remove them from the tank for their safety.

Here is a video that shows what a Frontosa tank could look like.

Frontosas are calm, social creatures. They are slow swimmers that are peaceful and relaxed. It is important to note that in a group of Frontosas, there should only be one male. Males are very territorial. The typical number is having six to eight Frontosas, with just one male.

Here are some options of tanks mates for Frontosa fish:

If taken care of properly, Frontosa fish can live a long time. Keeping an eye on your fish and looking out for signs of illness is crucial.

A typical disease that freshwater fish can get is ich. Ich symptoms include twitching, rubbing their bodies on hard surfaces like they are scratching themselves, and white spots on their bodies and gills. There is medicine for ich and fish heal quickly after receiving the medication.

Frontosas can also get parasites and infections from fungus and bacteria. Keeping an eye on their behaviors and diet is a good way to catch this.

When a fish gets sick, it is important to quarantine the fish so your other fish do not get sick. A separate tank with no plants or gravel is helpful so your fish can heal. If your entire tank is sick, the tank should be treated.

How to Buy a Frontosa Fish

You can buy a Frontosa at a tropical fish store or online. The average price from $10 to $70, depending on which type you are looking for. Typically, when you buy in bulk, the fish will be cheaper. When buying a breeding pair though, you could pay around $120.

Remember, Frontosas are highly desired and can be very expensive. Since people started to breed them, they have become cheaper, but you never know if or when the cost could spike.

Below is a video about Frontosa that gives great information and also shows what they look like.

We hope that this post has helped you learn about Frontosa Cichlids and their habits!