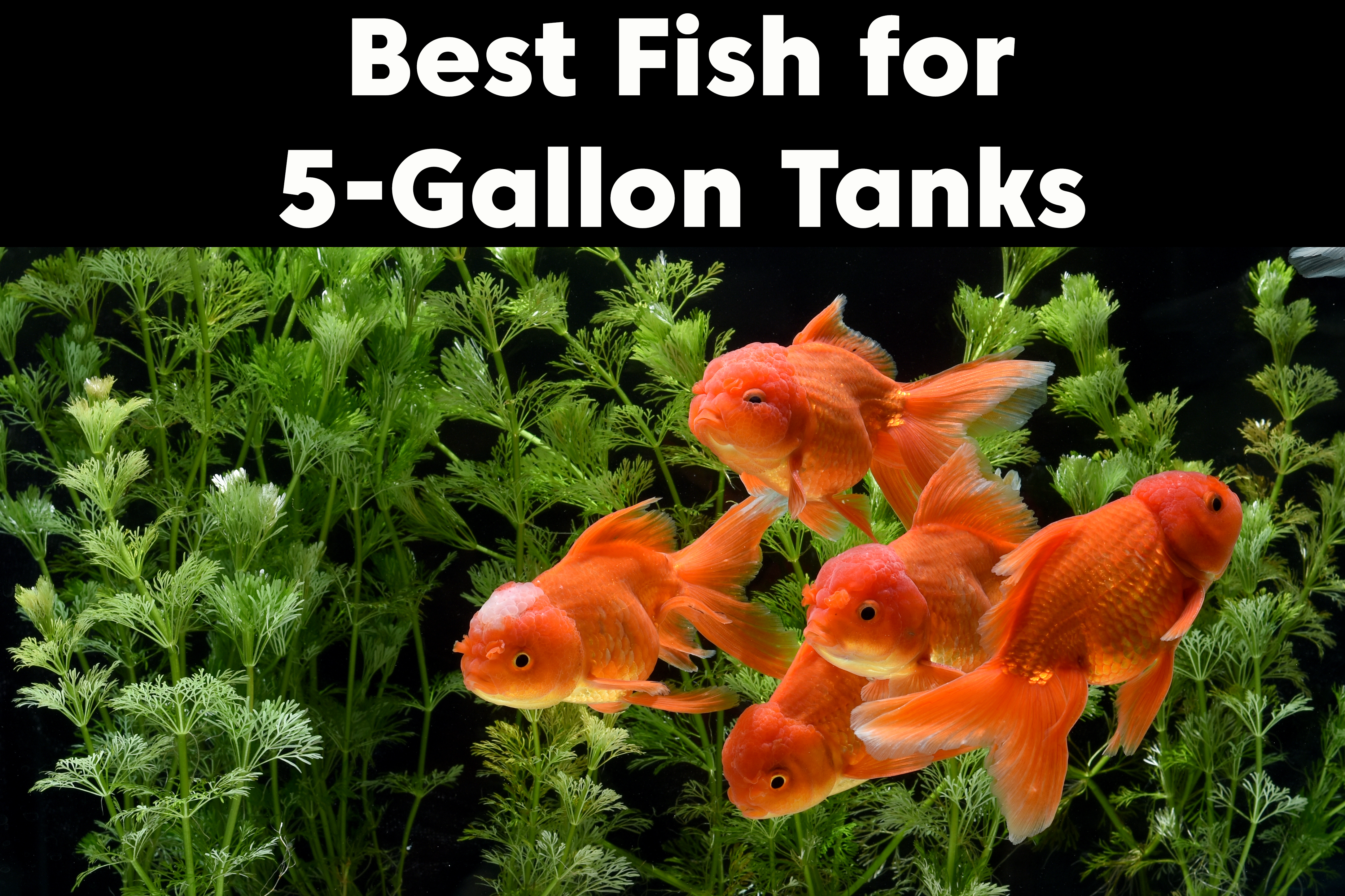 Nano tanks and micro tanks are trending in the aquarium hobby. Nano tanks are considered to be anything smaller than 20 gallons. With 5-gallon tanks being the most popular size, you may be wondering what fish you could fit inside, and you might actually be surprised!

Believe it or not, there are “nano fish” available that will work well for 5-gallon tanks, and even small shrimp (although they’re not fish) do well in a 5-gallon tank.  The first fish that comes to mind, betta, might not be the best fit for a 5-gallon tank, but I look at that in more depth below.

The Best Fish (and Non-Fish) for a 5-Gallon Tank

I take a look at each of these in more detail below, and also cover things you need to be aware of when housing fish (or shrimp) in a small tank.

Endler’s (sometimes called Endler’s Guppies) are some of the most popular nano fish on the market right now, and it’s easy to see why with their bright colors and lively personalities.

Males typically only get to 1-inch max (though many stay at .75 inches), while females can be up to 1.8 inches.

Endlers typically need to be kept in groups of 6 or more, so a 5-gallon tank should only be stocked with the smallest variety that reaches .75 inches.

Endlers prefer water temperatures between 78˚ and 80˚ F but can handle a fairly wide variation.

They do breed a lot, so keep that in mind if you decide to add this fish to your tank.

Ember tetras are some of the smallest fish on this list, maxing out at only .75 inches as adults.

These bright fish are reddish-orange in color and very active in the aquarium, but you’ll only see this if you keep them in groups of at least 7 fish.

They can handle a pretty wide temperature range, though they don’t like temperatures to get above 82˚ F.

They’re also peaceful community fish and should do well with just about any other fish.

These little rasboras live up to their name, having distinctive bright red/orange coloring with an added black stripe along each side.

Chili rasboras are always busy in the tank and are good fish for a peaceful community tank.

They’re also some of the smallest fish on our list, only reaching .75 inches as adults.

They prefer to be kept in groups of 6 or more, and generally like water temperatures between 68˚-78˚ F.

Be aware that these little fish are carnivores, and need things like frozen baby shrimp to supplement a flake food diet.

This is a new fish in the hobby, but it’s become pretty popular.  They’re stunning fish: with dark blue bodies, white or silver dots, and reddish-orange fins.

Even the females have this coloration, though it’s just a little lighter than the males.

They used to be sold under the name “Galaxy Rasbora,” but since they’re more closely related to danios than rasboras, their name was changed to reflect their fish family.

These fish can get up to .75 inches, another tiny entry on this list.  They’re also peaceful community fish and prefer water temperatures between 73˚ and 79˚ F.

Because these are peaceful community fish, they should be kept in groups of 6 or more.

These little fish are just like your average cory, only nano-sized.  There are a few different “nano” versions, but one of the most popular is the salt and pepper cory (not to be confused with the larger peppered cory).

These little guys max out at 1.5 inches, with most staying smaller than that.  They like to hang out together and should be kept in groups of at least three, although a group of six would be ideal (and maybe too many fish for a 5-gallon tank.)

They’re great little bottom feeders and enjoy eating everyone else’s leftovers, as long as they get the occasional shrimp pellet or algae water for themselves.

They’re also peaceful community fish and would fit well with most other nano fish that can thrive in water temperatures between 72˚ and 79˚ F.

These bright red shrimp stay small, at only around 1.5 inches for full-grown Ghost shrimp.

They enjoy munching on the algae in your tank and are safe to keep with most nano fish.  (The only thing to worry about is the fish trying to eat these guys!)

Another plus with these dwarf shrimp is how easy they are to take care of, and how tough they are.  It takes a lot to kill these little shrimp.

They do prefer to have hiding places in a tank and live plants if you have room in your nano setup for them.

Ghost Shrimp can handle a wide range of water temperatures and prefer to be in groups.

What Are the Special Challenges of a Small Tank?

Although it may not seem like it, smaller tanks are actually harder to care for than larger tanks.  I take a look at some of the reasons below.

Because you have such a small space, fish waste builds up more quickly in a small tank than it would in a larger one.   As the fish waste breaks down, it turns into ammonia, which is harmful to fish.

In order to keep your water healthy for the fish, you’ll need to do more frequent water changes than you would for a larger tank.

Another danger in keeping fish in small tanks is fish aggression.  Without any place to get away from other fish, some fish will feel threatened and lash out at their tankmates.

You could end up seeing nibbled fins, damaged gills, missing eyes, or more, even on normally peaceful community fish.  Some fish could even end up getting bullied to death in this situation.

This isn’t healthy for anyone in your tank, and can only be solved by moving all of your fish into a larger tank.

When you do water changes in a larger tank, the water that’s already in the tank acts as a buffer when you add new water.

That means if the water you’re adding through a water change is too cold, it won’t immediately drop the temperature in your tank because there’s enough water already in the tank to help stabilize the temperature.

However, in a small tank, there’s not much water to act as a buffer, and if the water you’re adding through a water change is too hot or too cold it can change the temperature of the entire tank right away.

This can cause your fish to go into temperature shock, and could even kill them.

As noted in one of my other posts, keeping fish in a tank that’s too small could stunt its growth.  While it may act fine, it won’t get as large as it’s supposed to and could end up being deformed because of it.

Keeping too many fish in a small tank, or keeping one fish in too small of a tank will stress out the fish, and stressed fish won’t grow at their ideal rate.  This is because cortisol, a stress hormone, has been shown to stunt growth in fish.

The only way to prevent this is to ensure you have a large enough tank for the size and number of fish you want to keep.

What About Betta Fish?

The first fish that probably comes to mind when you think of a 5-gallon tank is a betta.  So why aren’t they on the list of best fish for a 5-gallon tank?

If the only animal you want to keep in your tank is a betta, then it may be large enough.  But keep in mind that once you add gravel, a decoration, filter, heater, etc. that 5-gallon tank isn’t holding 5 gallons of water anymore, and might not have enough water volume left for your fish.

In addition, a 5-gallon tank is the absolute minimum tank size you need for a betta to be happy.

I’d recommend using a 10-gallon tank for a betta, and then you can add a few betta-safe shrimp or nano fish companions if you want.

Nano tanks are growing in popularity, and there are several types of fish you can keep in even a 5-gallon fish tank.  These include:

Keep in mind that not every small fish is cut out for a small aquarium, and you could see issues with fish aggression or stunted growth.  While bettas might seem like the ideal fish for a 5-gallon tank, it’s the absolute minimum size tank they should be kept in.

It’s also a lot more work to maintain a smaller tank than a larger one, and you’ll probably need to do more frequent water changes to keep your water parameters healthy.

You’ll also need to watch out for rapid temperature changes that can happen more easily with a small tank than with a large one.