The Dinosaur Bichir is known by many names: Senegal Bichir, Reed Fish, Dinosaur Eel, and Swamp Dragon are just a few. The unique appearance of this species makes it easily identifiable. Bichirs are characterized by a long, thin, eel-like body, pronounced teeth, protruding nostrils, and wide, iridescent eyes. The Dinosaur Bichir also had a serrated dorsal fin and large scales, resembling a dragon.

Though they resemble eels, Dinosaur Bichirs are unrelated to the snake-like marine dwellers. This species and other Bichirs are unique enough to exist as the sole occupants of the Polypterus genus.

The Dinosaur Bichir is native to Africa and India where it inhabits heavily-vegetated, slow-moving water systems. A successful carnivore, this species utilizes the vegetation and murky waters of their home to lie in wait and ambush unsuspecting prey. Bichirs utilize long, protruding nostrils to scent their prey and thick scales to protect themselves from injury.

Dinosaur Bichirs have a swim bladder that acts as a primitive lung, enabling this species to directly breath oxygen at the water’s surface and to survive for extended periods of time, as long as they remain wet, out of the water. Bichirs are fairly common in their native waters and may even be found in the accumulated water of roadside ditches.

Discovered in Egypt 200 years ago by French naturalist E. Geoffroy Saint-Hilaire, the origins of these fish date back to the Cretaceous period, when dinosaurs still roamed the earth. The name polypterus translates to “many fins,” referring to the serrated dorsal finlets along their back.

How Long Do Dinosaur Bichirs Live For?

Dinosaur Bichirs have a life expectancy of 15 to 20 years or more in an aquarium with excellent care and conditions.

How fast/slow should you expect your Dinosaur Bichir to grow?

Juvenile Bichirs from the pet store are usually between 10 and 15 cm (4 to 6 inches) in length. Dinosaur Bichirs grow relatively slowly, perhaps 2 to 3 cm a month, taking several years to reach their maximum size.

The maximum size of a Dinosaur Bichir kept in captivity is around 46 centimeters (18 inches) if kept in a tank of satisfactory proportions. In the wild, this species is known to exceed 70 cm (28 inches).

There are two subspecies of Dinosaur Bichir:

P.s. senegalus: This subspecies sports three horizontal bands as juveniles which fade as the fish matures. The upper jaw is slightly longer than the lower jaw, and the coloration is brownish-grey to olive on the dorsal surface and white on the ventral side. This fish has 8 to 11 dorsal finlets.

P.s. meridionalis: This subspecies can grow up to 110 cm (40 inches) in the wild and 80 cm (32 inches) in captivity. These fish also sports an olive-grey coloration but their upper and lower jaws are approximately the same lengths. Individuals of this subspecies usually have 9 or 10 dorsal finlets.

Bichirs are a type of large ray-finned fishes indigenous to water systems in Africa. Here are a few other types of Bichir commonly kept in the fishkeeping hobby.

Ornate Bichir: Though one of the most aesthetic types of Bichir, this species is quite timid, so seeing them out and about in their tank during the day is rare. Ornate Bichirs are also known to be more aggressive and grow larger than the Dinosaur Bichir.

Saddled Bichir: Not very active during the day, this species swims slowly looking for food. Considering it can grow to 75 cm long, it’s better to keep this species in a tank alone.

Barred Bichir: Native to the Kongo River, this fish is not very active during the day and spends the majority of its time in caves, crevices, and other shelters.

Reed Fish: This predatory species is also known as the Rope Fish or Snakefish and is mainly only active at night. A slow swimmer that prefers shelters, this fish will spend its nights hunting any fish smaller than 3 inches.

What do Dinosaur Bichirs eat in the wild?

The Dinosaur Bichir is found in dark, slow-moving freshwater systems in Africa where they utilize an ambush strategy to hunt almost anything they can catch. Due to poor eyesight, this species relies primarily on scent to find its prey.

What foods are recommended for Dinosaur Bichirs?

In an aquarium setting, Dinosaur Bichirs are voracious eaters and not picky when it comes to diet. You can feed your Bichir shrimp, mussels, silversides, worms, and almost any other variety of live food. Dinosaur Bichirs will also eat frozen food items and sinking pellets.

Bichirs are voracious eaters and predators. Their eyesight is poor and they rely mostly on their smelling senses to locate food. You can give a variety of foods to Bichirs, meaty treats and live foods being their favorite.

You can feed shrimps, prawns, mussel, whitebait, silversides, worms and more varieties of live foods. They are also been found eating the foods of other tank mates with equal zeal. So, you can give them anything, live foods, frozen foods or sinking pellet foods to bring variety in their diet.

Bichirs prefer being fed when your light is turned off. I recommend feeding them a quality sinking pellet. If they don’t feed on pellets right away you could starve them for a week and train them to eat pellets. The other option is to feed them live or freeze-dried food; this option can get expensive. A pellet I highly recommend is Hikari’s sinking carnivore pellets. This pellet makes it easy to wean fishes off of live food. Another reason I like this pellet is that it doesn’t cloud your water (still make it a habit to remove uneaten food).

Dinosaur Bichirs are night predators, so adults of this species will rarely eat with the light on. Feed your Dinosaur Bichirs in the dark once a day, but do not feed your fish more than they can consume in 2 or 3 minutes to avoid food waste negatively affecting water quality. Bichirs are not particularly messy eaters, but their high-protein diet can eventually lead to rising nitrite levels.

Like all fish, Dinosaur Bichirs thrive best in a tank that resembles their natural habitat and suits their needs.

A brief overview of natural habitat

Dinosaur Bichirs are indigenous to the water systems of 26 African countries where they inhabit slow-moving and densely vegetated waters.

The minimum tank size requirement for a Dinosaur Bichir is 340 liters (90 gallons) due to their large adult size. Shallower tanks with more floor space are ideal for these bottom-dwellers, so consider tanks at least 4 feet long.

If you need to check the size of your aquarium, feel free to use my aquarium volume calculator.

Dinosaur Bichirs can tolerate a fairly wide range of water conditions but this should not be an excuse to forego regular water maintenance.

Dinosaur Bichirs prefer a heavily-vegetated tank with plenty of crevices and caves to hide in. Java Fern and Java Moss are great plant choices for this species. Though not as timid as some other species of Bichir, they still need dark, out-of-the-way hiding places in their tank to feel secure. Create caves using smooth rocks, large pieces of bogwood, or ceramic plastic tubing. The substrate should be something easy to clean like soft aquarium sand.

Dinosaur Bichirs are slow swimmers, but strong, easily capable of jumping out of a tank. Though they may survive outside of the water for some time, a strong, securely-fitting tank lid is an absolute necessity for keeping Bichirs safe and contained. 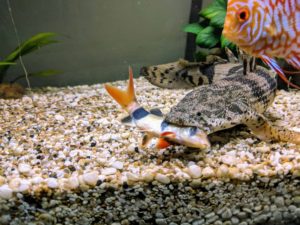 Dinosaur Bichirs are carnivorous predators: choose tankmates with care. Though Bichirs are relatively slow swimmers and not particularly aggressive, they will predate any animal that can fit in their mouths and may even nip at other, larger fish, though this is usually attributed to their poor eyesight. Dinosaur Bichirs should be kept with other fish of a similar size, but avoid very aggressive species such as cichlids or snakeheads.

Some bichir tankmates are:

Dinosaur Bichirs are generally only a semi-aggressive fish, making them great choices for a community tank of other large fish. This species spends most of its time in the bottom of the tank where they swim slowly or lie on the substrate. They are generally more active at night, so consider installing a blue “moon-light” to run for a few hours each evening.

How to Keep DInosaur Bichirs Healthy

There are no specific diseases that Dinosaur Bichirs are prone to, but this species is susceptible to typical ailments that affect freshwater fish.

Like most aquarium fish, Dinosaur Bichirs are susceptible to ich, a disease caused by protozoa. Symptoms of ich include rubbing their bodies on various surfaces in the tank, twitching, and the appearance of white spots on the gills and body. They usually respond well to medication and heal quickly.

Bichirs are known for obtaining cloudy eye, this usually due to poor water quality. Make sure you keep up with your water changes and it should start clearing up if you work quickly!

When treating an individual fish, best practice calls for removing the fish to a separate “hospital tank” devoid of plants or gravel for treatment. If a disease has affected an entire tank, it is probably best to treat the tank. Read and follow the instructions for any medication or treatment for best results. Take care, as some treatments can destroy beneficial bacteria or otherwise adversely affect water quality. The carbon in your filtration system may absorb some medications, rendering treatment ineffective, and may need to be removed.

Know the signs and treatments of common freshwater fish diseases to catch problems early and keep your Dinosaur Bichir happy and healthy.

Dinosaur Bichirs are typically easy to keep healthy as long as you monitor and maintain your water composition and quality. Perform water changes every 2 weeks and test water quality regularly to keep ammonium and nitrite levels in check, and do not overfeed as food waste will cause these levels to spike. Maintain an efficient filtration system to maintain water quality.

High-quality foods are less likely to cause organ issues and constipation than cheaper foods.

Keep in mind that parasites and bacteria can be introduced by new tankmates as well as live food, plants, and tank decorations.

Is a Dinosaur Bichir right for you?

Whether you are new to fish-keeping or an experienced aquarist, keeping a Dinosaur Bichir happy and healthy is relatively easy. This hardy species can withstand a variety of water conditions but do require a rather large tank. As long as Dinosaur Bichirs are kept in a suitable tank, fed a high-protein diet, and given plenty of places to hide, they can easily flourish in your home aquarium.