For most fish-keeping hobbyists or enthusiasts, a tank crash would be devastating. Losing most or all of your tank life in a short period of time is difficult to recover from, and may force you to restart your whole load. Tank crashes aren’t common. However, power outages can cause tank crashes if you’re not prepared to handle them. Getting the best aquarium battery backup system hooked up to your tank can insulate you against the risk of losing your fish and plant load from power failures.

You have a number of options for battery backup systems. Uninterrupted Power Supply (UPS) systems are a common choice that’s widely available, because of their application for a wide variety of electrical equipment. Some tank owners choose to use generators because of their ability to last for as long as necessary, although they’re less popular than UPS systems.

Whatever you choose to hook up to your tank, it’s advisable to set it up sooner rather than later. You never know when a power outage might occur. If you know there’s a storm coming in or any other event that may threaten the power supply, get a backup system now before you’re stuck without it when you really need it!

Why Get a Battery Backup for Your Aquarium?

What makes an aquarium battery backup a good idea? Each fish keeper may be different, but there are a few convincing reasons that apply to most people:

Essentials like filters, powerheads (pumps), air suppliers, and, heaters can all be connected to a battery backup and operated for anywhere from a few minutes to hours at a time. Maintaining life support systems is crucial in delicate aquarium environments. Many fishkeepers hook only the bare necessities up to their battery backups, in order to help them last longer while the power is out.

If the power outage lasts a little longer, you can run tank essentials at short intervals over a longer period of time. Some UPS battery backup systems can do this automatically, though most will require you to switch them on and off manually. This is only recommended if there is an extended power outage, as it would be difficult to maintain on a regular basis.

In aquarium environments that are more particular, such as coral reef aquariums, or in locations that have vastly different temperatures between the room and the water, a backup is useful for reducing casualties. If the power were to go out for a few hours, tanks in either of these situations could suffer a lot of casualties. In reef tanks, coral casualties could be dire and may cause the entire tank to crash.

Peace of mind while away

While you’re near your aquarium, you can solve any problems that come up. However, if you have to leave for an extended period of time, a battery backup will give you a sense of peace while you’re gone. Whether you’re going on vacation or just leaving the house empty for longer periods of time, you won’t have to worry as much about the tank crashing while you’re gone.

Aquariums and the life inside them are very expensive. Although the tank itself will not fail, everything within it can die if the power stays off for too long. Depending on what’s inside your tank, your load could represent a significant investment. A battery backup helps you protect the time and money you’ve invested into developing your tank. 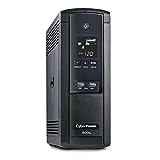 This is a UPS that’s designed for use with desktop computers, but it’s highly effective for use with essential aquarium electronics as well. There are a few different models you can get that have a different time allowance and power output, including the 850VA, 1000VA, 1350VA, and 1500VA models. The 1500VA model will last the longest of the four and will allow for more devices to be connected at once if your tank has a lot of essentials.

With only the bare essentials plugged in, this UPS to rated to last somewhere around 45 minutes to an hour. Depending on how bad the power outage is, it could keep your tank going without any noticeable interruptions. You can read the battery levels, output, input, and other relevant information on the built-in LCD screen.

Along with a UPS, this device also acts as a surge protector to keep your equipment safe from power fluctuations. In some cases, this can help you keep your aquarium electronics running throughout irregular power levels, even if other electronics in the house are acting up. There are 12 outlets in total on the device plus 2 USB charging ports.

This backup can be bought in four different sizes: 425VA, 600VA, 650VA, or 850VA. The 850VA option is the best for most fish tanks because it can support the essential systems for a lot longer than the others and buy you valuable time during a power outage. APC is also a well-known brand with a great reputation in the world of UPS systems, adding to the trustworthiness of this particular model.

With normal outputs for a fish tank, you can expect around 30 minutes of time from the 850VA model once the power outage starts. It’s a good choice for covering short power outages and keeping you from having to switch to a more permanent system if the power is only off for a short time. It keeps things going when they need to.

This battery backup system has a total of 9 plugs. Six plugs are for the battery backup and surge protection and 3 are for surge protection only. Plugs are labeled to help you avoid using the wrong one. There are also 2 USB charging ports included in the 850VA model. An alarm will alert you when the device switches to battery power, letting you know when a power outage occurs.

If you’re not too worried about heat, but air supply is tricky to do without in your tank, there are other options for you. Instead of purchasing a full battery backup, you can look at individual battery-operated life support systems. Here’s a great example of an affordable life support alternative option for an aquarium:

Although this air pump is designed for fish and marine life in transit, it’s also useful for aquariums. It operates on battery power, making it a great choice for power outages. You can keep your tank oxygen levels high without having to worry about how long the power is off.

This air pump has an air stone and an 18-inch air tube to put air into the tank. You can use it even for relatively large tanks, or combine multiple air pumps for the biggest personal tanks. The air pumps can be turned on manually once the power goes out. It operates on 2 size D batteries, which can be replaced at any time to start it operating again. The device can last for more than 2 days on each pair of batteries.

If you don’t have a battery backup system for your aquarium, or if your current one isn’t doing the job, try the CyberPower UPS system. You’ll get a reliable unit that can handle anything you need to plug into it. Since the batteries are replaceable, you can make it last for as many years as you want by just replacing the battery packs as needed.

Aquarium battery backup systems are very important for a tank. If you want to keep your fish load alive and well, with or without power, you need something to keep the tank working in all conditions. A good UPS battery system or a simpler alternative could mean the difference between keeping your fish alive or having to replace half your stock after a bad day.