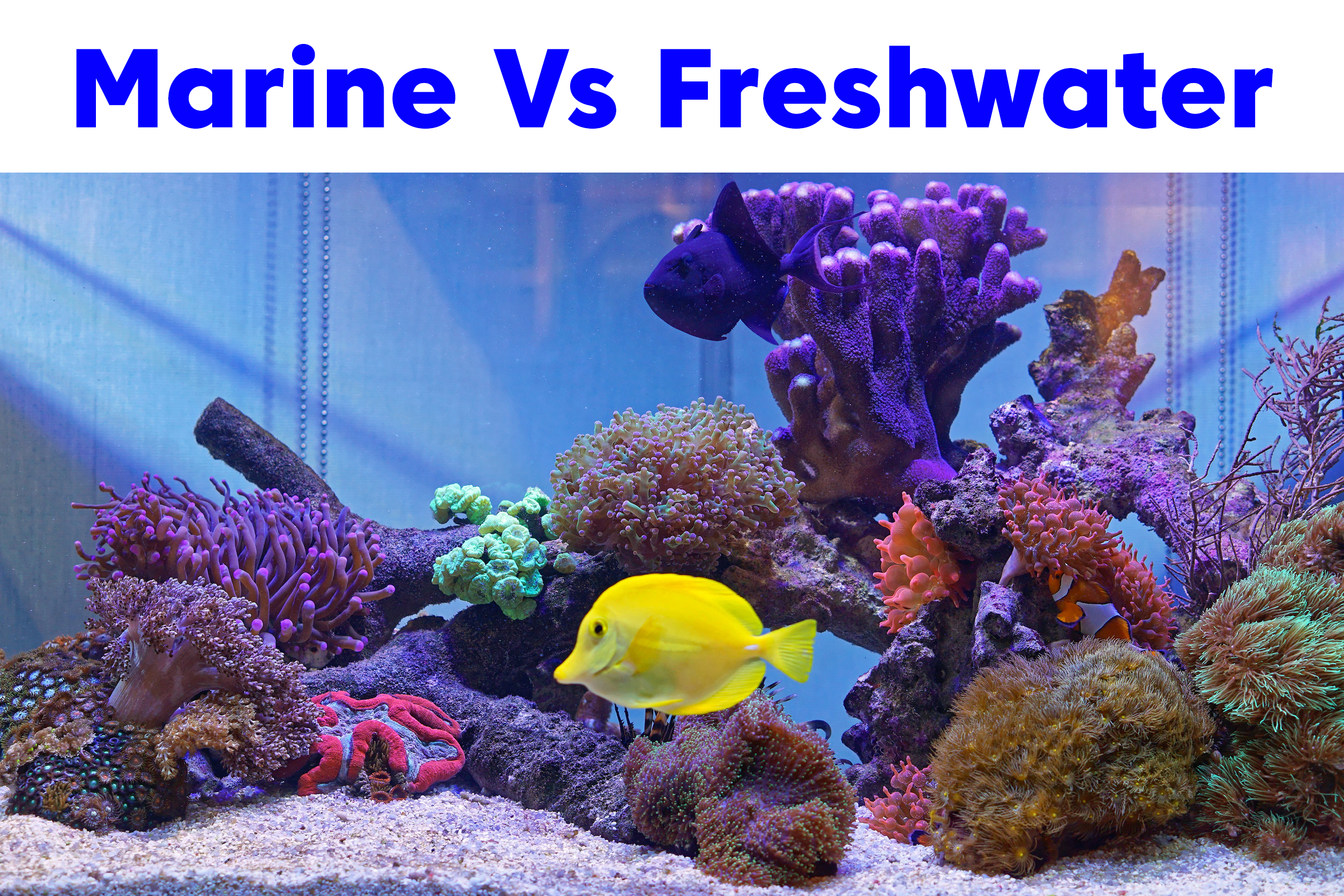 Think about the most intensely colorful fish at your local fish store or your favorite large-scale aquarium.  Bright neon pinks, electric yellows, eye-burning blues—they’re probably almost all marine (or saltwater or ocean) fish.  While there are a few species of eye-catching fresh-water fish, too, such as cichlids, guppies, and gouramis, it generally seems like the most colorful fish out there are marine fish. So, is it really true that marine fish are more colorful than freshwater fish?

Reef fish develop more color as a defense mechanism to adapt to their habitat. Reef fish are very colorful, but many ocean creatures, such as sharks and rays, are dull grays, browns, or whites.  Remoras, which love to hang out on certain marine species, are also pretty plain—gray, brown, black, or even white. Even Swordfish, which are pretty popular fish around the world, are only silver or silver and black or dark blue.

It really just depends on which part of the ocean you’re looking at—fish that live along coral reefs tend to be more colorful than other ocean fish to protect themselves from predators.

The marine fish you typically find in your local fish store are more than likely reef fish—the most colorful of all ocean fish.

That’s why it seems like marine fish are so much more colorful than freshwater fish—because the varieties sold at fish stores tend to be the most colorful varieties available, with breath-taking patterns and color combinations.

One reason freshwater fish might not be as colorful as some of their marine cousins is their environment—muddy rivers and deep, dark lakes mean fish rely on other senses more than sight to find food or prey, so fish don’t need to be colorful.

Dark, monochromatic backgrounds tend to result in fish that match—it’s easier to hide in a muddy river bottom if a fish looks like the mud!

Are there any freshwater species that are just as colorful as reef fish?  Some come fairly close—and of course, GloFish, which have been genetically enhanced with the genes of jellyfish and corals, are quite bright even without a blacklight.

A few of the more colorful species of freshwater fish include:

And, believe it or not, albino Corydoras really stand out against black aquarium gravel or dark decorations/plants.  They tend to be pinkish/peach with bright pink eyes and really make a statement if you’re looking for something a little more vibrant than the typical cory colors.

Here are a few tips to brighten up the colors of the fish in your freshwater tank:

If you have your heart set on marine fish, keep reading as I talk about what makes them so colorful and how to keep them colorful in a saltwater tank of your own.

What Makes Marine Fish So Colorful?

There are a lot of theories and a few things we know for certain.  I take a closer look at each one below.

I know what you’re thinking—intense blue and yellow patterns on a fish tend to stick out, not blend in!  But, if you’re a fish living in a brightly colored coral reef, where everything is colorful, then it makes sense to be colorful, too, and blend into all the other bright colors around you.

Just imagine how much a gray fish would stand out against a pink, yellow, and orange coral reef background, with brightly colored sea anemones gently waving all around it!  That would probably be the first fish to get eaten by a predator.

All the spots, dots, stripes, and colorful patterns could add up to massive confusion for predators, too.  For example, if a fish has lots of large spots, a predator might not be able to tell where the eyes actually are.  And stripes might be difficult for some predators to see, or could just be confusing to them, making it hard for them to tell if they’re looking at a rock shelf or a fish.

Finally, the colorful designs on some fish mimic their environment, like wave patterns, light hitting the water, or the rocks and corals along the seafloor.  It’s hard for a predator to swoop down from the air and grab a fish if they can’t tell the difference between the bright blue water and the fish they’re looking for, or think the fish is just another colorful bit of coral.

This would keep predators from eating certain fish since they’d associate certain colors or patterns with poison, just like the orange wings with black patterns on Monarchs warn birds to stay away.

Did you know that people only have three color receptors in their eyes?  (Green, red, and blue!)  But some marine fish species have four, and even five!  That means they can see colors we can’t—like ultraviolet.  Some insects can also see colors in the ultraviolet range—like honey bees and butterflies.

Because marine fish can see so many extra colors people can’t, it makes sense that they’d come in a wide range of eye-popping colors.  It also helps them recognize each other—for example, clown fish could recognize other clown fish through patterns and colors—in a literal sea of other fish.  This helps them to find friendly fish who aren’t going to try and eat them, or be in competition with them for living space or food.

When it comes to being a fish, the most colorful males tend to attract all the females, which is another reason why marine fish come in so many colors and patterns.  The males want to attract a mate, and the females are picky!

Scientists have discovered that the fish species that can see ultraviolet light use it in different ways.  Some fish have the ability to create an ultraviolet flash in order to communicate with other fish who can see the ultraviolet wavelength.  While we can’t see it without special equipment, they can see the bright, glowing colors and run away from danger or dive into a delicious dinner, depending on what they’re trying to say.

So, what can you do to keep your marine fish colorful in your tank at home?  Here are a few tips.

Similar to our freshwater friends above, lighting can go a long way in a saltwater tank.  Some types of lighting enhance the colors of specific fish, too.

For example, choosing a “purple” spectrum will bring out the colors of fish like Blue Tangs and Clownfish.

Putting an emphasis on pinkish or magenta lighting will make your Flame Angels, Longnose Butterflies, or Yellow Tangs shine!

There are lots of lighting options to choose from, so you’re sure to find the right one to make your fish stand out.

Saltwater fish can actually lose color from battling parasites.  Some, like velvet, don’t show outwardly on the fish.  You’ll just notice some color loss and maybe a few behavior changes.

If the water parameters, salinity, and water temperature in your tank are good, but your fish are going pale and acting differently than normal, lookout for signs of parasites or other illnesses.

Believe it or not, some saltwater fish lose their color when they sleep!  This is nothing to worry about, and you’ll see the colors perk back up once everyone wakes up and goes about their fishy day.

Reef fish are colorful for a variety of reasons—camouflage, mating, communication, warning other animals not to eat them, and telling each other apart.

You can keep them looking vibrant in your tank at home by varying the type of light you use, making sure they stay healthy and aren’t stressed.

While not as bright as their marine cousins, freshwater fish have some colorful species that can be kept in a home aquarium, as well—just in case you’d like to brighten up your tank but aren’t ready for a marine tank just yet.

Can Betta Fish live with Shrimp?

Can a Male and Female Betta Fish live together?