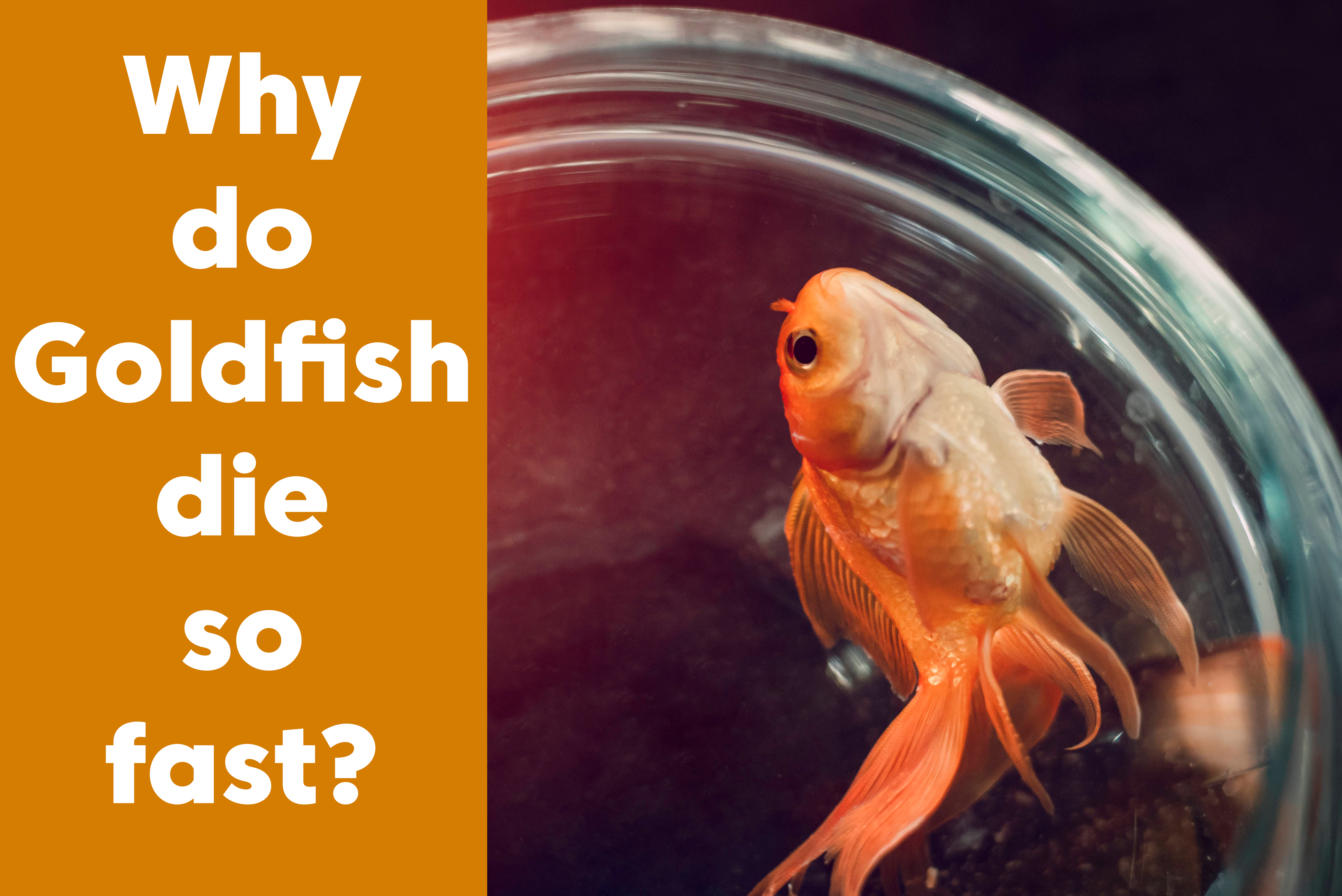 have a short lifespan. Contrary to common belief, goldfish don’t die as fast as you think they do. If you’re wondering “Why does my goldfish die so fast?” Read on and I’ll tell you why.

We’ve all seen it on television and in other popular cultures: a single Goldfish living in a small, round vase, nicknamed a “fishbowl.” Maybe there are some decorative pebbles at the bottom and a little house; no filtration system or aerator to be seen.

No wonder we have this idea that Goldfish have short lifespans! In the cramped setting of a fishbowl the water is difficult to filter, the small opening provides poor oxygen exchange and the round shape is easily knocked over and smashed. These circumstances quickly lead to a toxic environment and the death of your fishy friend.

Though one of the lowest maintenance pond fish you can acquire, Goldfish still have a set of requirements that must be met in order to thrive in a backyard pond setting.

In reality, most species of Goldfish, when properly cared for, can live upwards of 20 years. Given proper amounts of space and nutrition, Goldfish can grow to be a foot long or larger!

Here are some common issues new Goldfish owners run into and how to combat them.

One last issue to touch upon is the purchase of low-quality fish. Often when starting a Goldfish pond, potential fishkeepers visit a pet store and purchase cheap feeder goldfish. Feeder Goldfish have been raised in extremely low-quality conditions, as they are kept just long enough to be fed to other animals. These conditions do not create very healthy fish specimens, and feeder fish do not usually enjoy the same longevity as other Goldfish raised in more optimal conditions.

Where to Purchase Goldfish

Where you purchase your Goldfish can be the difference between fish that die within a few weeks and fish that live twenty or more years. Before purchasing Goldfish, here are some things you should look into in regards to their previous care:

Here are your options when it comes to buying Goldfish:

Pet store chains: Chains such as Petsmart and Petco offer Goldfish for sale, but have developed a bad reputation from multitudes of customers who have ended up purchasing sick fish or fish that died shortly after purchase.

Independent pet stores: Each store is unique and conditions may vary. As previously stated, pay attention to conditions such as tank size, cleanliness, fish health, and staff knowledge.

Specialist breeders: If you can find a breeder in your area that raises Goldfish, this is your best option. These people are usually passionate and caring fishkeepers.

Online: Many people are surprised to learn that you can purchase fish online, but this can be a valuable option as long as the proper courier (licensed in live fish transport) is used.

The number one reason most Goldfish die quickly is due to poor water quality. There are many possible issues with water quality that could lead to mass die-offs.

Nitrogen Build-Up in Your Goldfish Tank or Pond

The Nitrogen Cycle is a 3-step process where beneficial bacteria break down the ammonium produced by fish waste and other organic matter into the less harmful nitrate.

Fish waste, decaying matter, and other organic materials break down into ammonium, which is deadly to fish in low concentrations. Beneficial bacteria are essential to break down the ammonium into nitrite (which is still toxic to fish) and then further into nitrate, which is only toxic at very high concentrations. (To learn about the Nitrogen Cycle, click here.) Nitrate is absorbed by plants.

If you find that your nitrogen levels are too high, consider that you may have too many fish in your aquarium (or pond), not enough plants, or have not allowed enough beneficial bacteria to build up in the ecosystem to keep up with ammonium levels.

Nitrogen levels can be tested using a water test kit. Beneficial bacteria cultures can be purchased and added to the water to jump-start the biological filtration process.

Though fish don’t breathe air as we do, they filter oxygen that is dissolved in the water in which they live. Signs that your tank or pond may have low oxygen levels include fish congregating and swimming near the surface and seemingly “gulping for air,” foul odors, and aggressive algae growth. When there is not enough oxygen in your tank or pond, the largest fish typically die first.

Oxygen levels can also be raised by introducing more plants, as these release oxygen during photosynthesis. Floating plants in particular lower water temperature which increases the amount of oxygen the water can hold.

If you have a pond and live somewhere where it freezes over during the winter, a lack of water surface area can also cause low oxygen levels. Make sure to break up ice using an aerator or de-icer to allow gas exchange to occur.

If you have a small pond you add water to or are making water changes, you may use tap water to facilitate your needs. Tap water has added chlorine or chloramine that is extremely harmful to fish. If your tap water has the gaseous chlorine added to it, simply setting your water aside for a few days will allow the gas to dissipate out naturally before adding the water to your water.

Chloramine, on the other hand, is fixed into the water supply in areas where it is utilized as a sterilizer and will not disperse naturally. Tap water with chloramine is rendered safe for your fish using a neutralizing liquid.

To find out more about your water’s chemical components you can usually head to your local water company’s website. Many have an interactive feature where you can input your postal code and see what chemicals are in your water supply. It never hurts to use a neutralizer if you are not sure.

Goldfish enjoy water temperatures between 62 and 70 degrees and are considered cold-water fish. Ideal ponds will be at least partially shaded and contain floating plants that keep the water temperature in check.

Goldfish survive freezing temperatures by going into hibernation. If your pond is at least 3 feet deep, it is unlikely the water will freeze completely.

If you have an aquarium, make sure the lights you have don’t heat up the water. If you’re looking for a safe option to light up your tank, I highly recommend LED aquarium lighting.

Another leading cause of Goldfish death new fishkeepers face is illness. Here are some common illnesses Goldfish can suffer from.

Ich is a curable parasite that appears as white spots on the gills and body of a Goldfish. The best way to treat ich is to isolate the sick individual in a “hospital” tank and treat them with a fungicide.

Symptoms of flukes include fish scratching their bodies on surfaces, an outer mucus covering, and swollen bellies. Flukes are parasitic flatworms that attach to the inside of a fish’s gills and infestations are treated with doses of Praziquantel.

Swimbladder disease is characterized by fish swimming sideways or upside-down, often with a distended belly. This issue is usually caused by overfeeding, so consider feeding less or even fasting your fish for a few days.

Ideally, you should only feed your Goldfish as much food as they can completely consume in a few short minutes. You can also increase your fish’s fiber intake with peas or a few slices of cucumber.

Swimbladder disease is not the only possible repercussion of overfeeding your Goldfish. Feeding your Goldfish more than they can eat at one time can lead to algae blooms, which won’t hurt your fish, but may ruin your tank’s aesthetic. The risk is that when treating the algae bloom, the vast die-off of algae could raise the ammonium to toxic levels very quickly, thus killing your Goldfish.

Incompatible tank mates can be another cause of Goldfish death. In a backyard pond setting, Goldfish, especially younger, smaller fish, can fall prey to turtles, frogs, snakes, and even other fish. The neighborhood cat or birds can also cause premature deaths among your fish.

Overcrowding can cause spikes in ammonium levels as well as increase the likelihood for the spread of disease. Fully grown Goldfish can require as much as 20 gallons of water per fish. These fish require a large natural environment with exposure to the sun daily. Fish should have enough space to swim freely in their pond without bumping into pond ornaments or conspecifics.

Once you’ve worked out the most common issues associated with being a new fishkeeper, raising Goldfish can be a rewarding and entertaining experience for years to come!

Here’s Why Your Goldfish is Swimming Sideways

Can Goldfish Live in a Bowl?