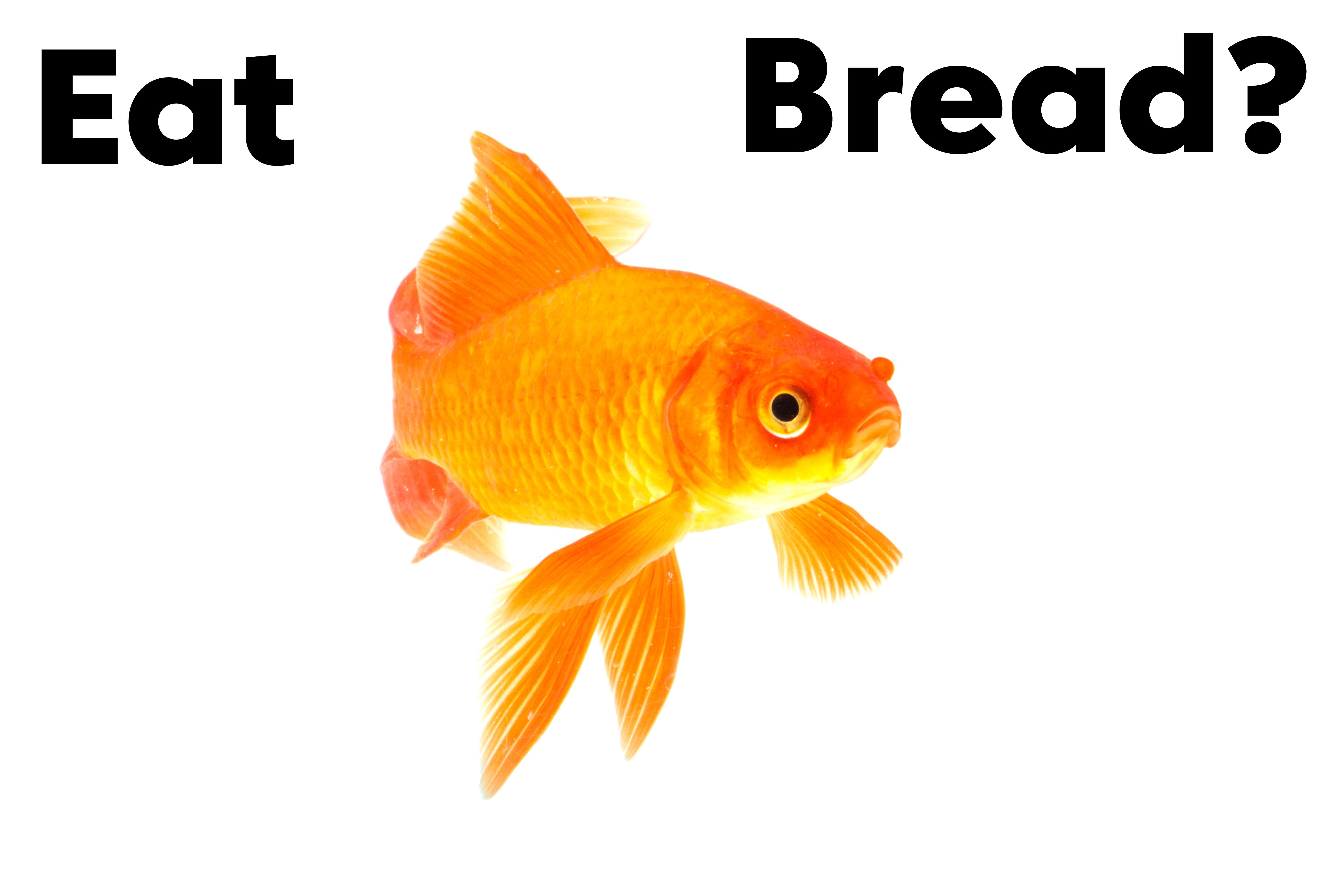 We have all done it. As we walk through the bodies of water in the park or near our friend’s fishpond, we look for some bread to throw at the goldfish. And why not, the goldfish seem to love it as much as we like watching them swarm to the food. But not many of us ever stop and think for a minute if this is healthy for the goldfish we have thrown that bread to. The truth is experts do not recommend feeding pond or aquarium goldfish any bread. In this article, I will talk why about why you should not feed goldfish bread and also discuss many healthy foods that are recommended for goldfish to eat.

So, Can Goldfish Eat Bread?

Absolutely not, although feeding goldfish bread seems innocent enough and the bread also makes a convenient way to feed goldfish when someone runs out of regular fish food. Why should people not feed their goldfish bread? There are three main reasons for this:

Whether it’s a human, aquatic life, or other animals when they eat bread the same things happen in their digestive systems. That bread will tend to expand. It’s just a natural occurrence when it comes to foods containing yeast. It’s the reason that people feel uncomfortably full after eating more than one sandwich or a jumbo hamburger with an equally big bun.

Most products that contain wheat are known to cause bloating. It’s no secret that the largest percentage of any ingredient that goes into making bread is wheat. This wheat also contains another harmful substance which I will talk about next.

3. The temptation is to overfeed the goldfish

When people give bread to their goldfish or at an outdoor pond they seem to like to throw all of the bread they have in the water. That’s a problem because goldfish are not really good at saying “hey I am full I will stop eating”. They will pretty much eat until all the bread that has been put in the water is gone. This combined with the other reasons above not to feed goldfish bread tends to make things even worse for the fish.

So what’s Okay to Feed Goldfish?

Goldfish are omnivores so it’s not hard to find foods that they like and at the same time are good for them. Although you probably don’t want to throw a steak into your goldfish pond, even a small amount of meat prepared just right is good for them. They are not picky eaters either, so that makes it easy to find healthy treats to give them on occasion.

Best foods to feed goldfish instead of bread:

That’s right. That same old boring fish food that people throw into an aquarium or pond every day is the absolute best thing to feed goldfish. That’s because like most foods it’s specially formulated to help supply goldfish with all of their nutritional needs. Rest assured the goldfish do not mind eating it day after day either. They are not concerned with what they eat as long as they get fed. That’s why they attack the fish food so vigorously each time it’s placed into a tank or garden pond.

What is fish food for goldfish made of? It’s composed of a variety of different proteins and vitamins that are essential for proper goldfish health. Some of the main ingredients in healthy goldfish food are comprised of fresh fish and seafood proteins. These include bits of salmon, plankton, krill, squid, herring, clams, and even brine shrimp. Some manufacturers will even include pigment enhancers to help goldfish maintain their vibrant colors.

Goldfish food comes in both pellet and flake forms. If you have smaller or young goldfish, then it’s best to choose flakes over pellets. Pellets are also easier for goldfish to digest if they have been soaked for a few minutes in water.

These are a nice healthy treat for goldfish. Most aquarium supply stores will sell frozen fish food. This consists of such things as worms, brine shrimp, and the larvae of mosquitoes. Don’t ever put frozen fish food directly into a pond or tank. Place it in some warm water until it’s completely thawed and then distribute it in the fish tank or pond. Do not feed frozen fish food to your goldfish more than occasionally. The high amounts of protein in it can cause constipation.

Unlike most kids, goldfish seem to really like their vegetables. That’s if they are prepared correctly. Some typical vegetables that goldfish are known to eat are peas with the outer casing removed, lettuce, peeled carrots, peeled cucumbers, and some squashes such as zucchini. These must be boiled down until they are soft before being introduced into the water. Vegetables will help clean out the digestive tracks of goldfish.

Although goldfish can make short work of aquatic plant life with their eating habits, it’s still good to add some to a tank or pond once in a while. Much like vegetables do, aquatic plants, when eaten, will help clean out the digestive tracts of goldfish. Goldfish love duckweed and anacharis and these also tend to grow very quickly. Leaving a few algae on the back of a fish tank or in a pond never hurts goldfish either.

If someone is looking to cut fishkeeping costs, then they may want to try making their own gel food for their goldfish. These gel foods tend to be pretty easy to make and they will help save money. Typical ingredients in homemade gel food for goldfish include salmon, herring, vegetables, and even adult multivitamins. Do not use gel food as a replacement for store-purchased fish food. Alternating between gel food and store-bought fish food will help keep your goldfish healthier.

How Does A Person Know Their Goldfish Are Healthy?

Someone does not have to be a certified fish doctor to tell if their goldfish are healthy or not either. All one has to do is look at their behavior in the pond or aquarium. Goldfish like to swim around constantly as they are creatures of habit. So when someone sees their goldfish in a stationary position for a long time, floating, bobbing back and forth, swimming upside down, or sinking straight down at times, these are all bad signs.

Some Things Not Many People Realize About Goldfish

Here is something for a person to think about the next time they go to feed their goldfish by hand. Most people do not realize that goldfish actually have teeth. Although they are not actually teeth that someone would ever have to worry about, they are still there nonetheless.

Goldfish have a jaw that is not like a human jaw that is stationary with an upper and lower set of teeth. Goldfish jaws tend to extend and protract based on what an individual goldfish’s feeding needs are at the time. Some of the teeth goldfish have are located in their throats too.

Here is some advice on how to properly feed goldfish. 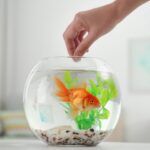 I mentioned that the absolute best thing for someone to feed their goldfish is fish food. That’s because it has balanced nutrition in it that all goldfish need. That’s why fish keepers should treat the other food they put into their tank or pond as occasional treats.
Feeding your goldfish other types of food two or three times a week is plenty. This also makes fish feeding much easier on the fishkeeper (you). 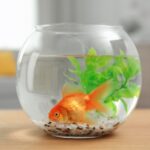 While it’s unhealthy for goldfish to eat too much, overfeeding also harms their environment. That’s because when goldfish eat too much they release higher amounts of waste into the water which causes the water in their tank or pond to become less healthy for them.
You can avoid this to some extent by feeding goldfish small amounts of food 2 or 3 times a day instead of having one big daily feeding. 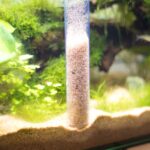 After your goldfish are done eating, I recommended removing leftover food from the tank after 5 to 10 minutes. This will keep the goldfish from overeating and help keep the pond or tank water from getting fouled up as the food deteriorates in the water.

Why is My Goldfish Swimming Sideways?

Why do Goldfish Die so Fast?