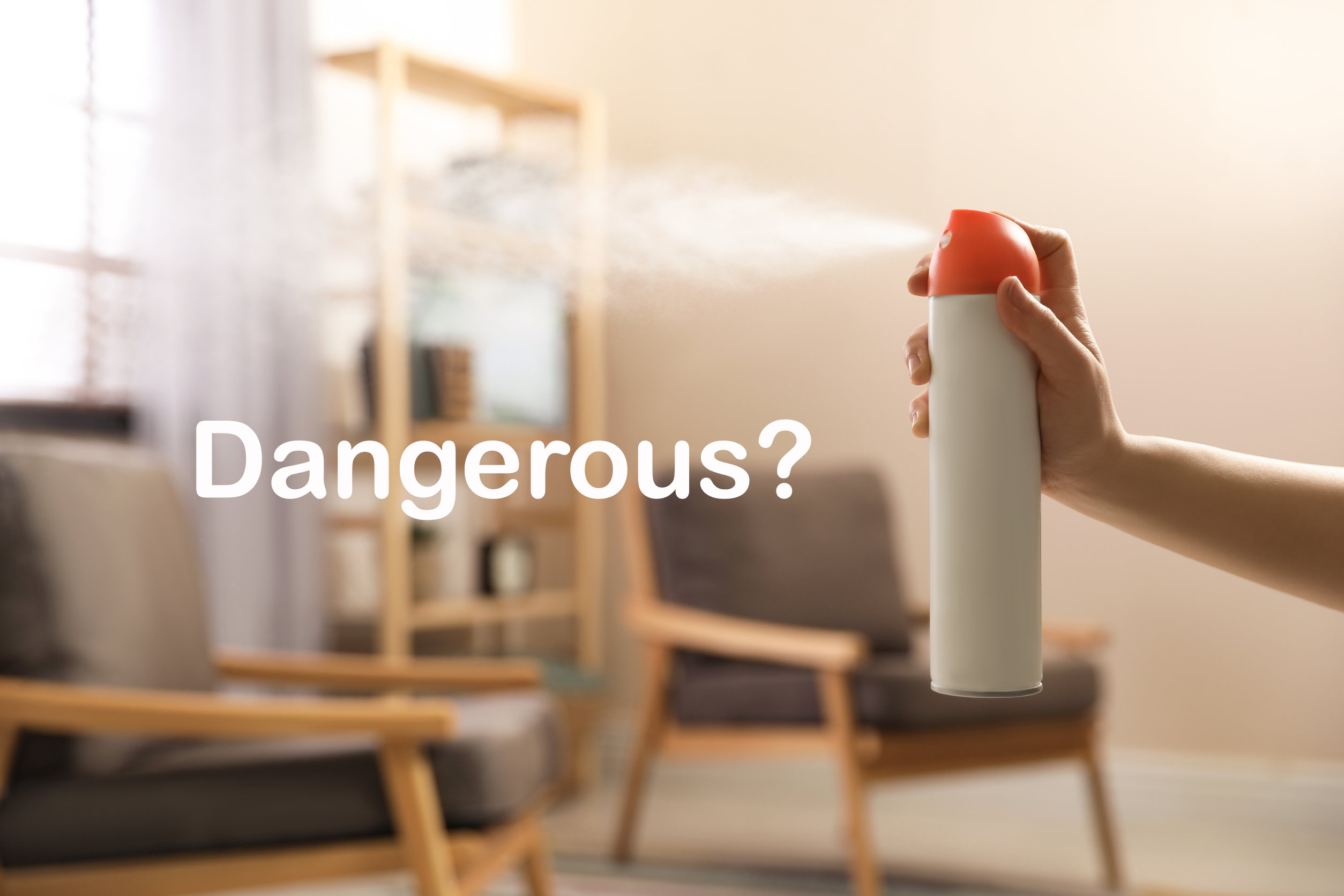 Chemicals in air fresheners can rest on the water surface of your tank, dissolve itself into the water, and make their way into the gills of your fish. They can also prevent oxygen from entering the water or even react with water and pull oxygen from the water and suffocate your fish.

If you have an aquarium, it’s greatly advised to not use the following in the same room:

Why Would Air Fresheners Affect Fish?

First, I want to look at why spraying or diffusing something into the air could affect fish in an aquarium anyway.

Chemicals in aerosols, plug-in fresheners, candles, diffusers, and spray bottles can rest on the water in your fish tank—especially if you have a tank without a hood or lid.

Those chemicals can dissolve into the water and be filtered into the gills of your fish, or be ingested at feeding time by hungry fish going to the water’s surface to grab their dinner.

Other air fresheners can leave a residue on the surface of your tank’s water, which could prevent oxygen from entering the water, or other gases from leaving the tank.  And, unfortunately, some chemicals can react with water and suck out the oxygen, leaving your fish gasping for breath.

And, of course, some air fresheners contain chemicals that are actually toxic to fish, like phenols, phenylpropanes, and ketones.

So, that’s the bad news—there is always the possibility that chemicals in the air near a tank could settle on the water and affect your fish.

Even tanks with lids can have open areas where sprays or fumes/smoke could still reach the water’s surface.

And tanks that use air pumps could be churning surface chemicals into other parts of the tank more quickly or thoroughly than a filter alone would.

There are many different ways to freshen up a room—using a plug-in air freshener, spraying an air freshener, like Febreze, using the old-fashioned Renuzit-type fresheners, which use a solid material and evaporate into the room without using heat, and using diffusers, misters, and candles.

There seems to be a general consensus among aquarium owners that the most potentially dangerous air fresheners are those that are sprayed or diffused into a room, specifically Lysol, Febreze, and scented oil diffusers.

If you’ve recently used any of these in the same room with your fish tank, don’t panic just yet.  I look at some of the (very limited) data below.

What Does the Data Say?

It’s widely known that insecticides for home use can be harmful to fish, and many brands include warning labels saying they shouldn’t be sprayed near fish tanks, or that the tanks should be completely covered with saran wrap, a towel, or cloth and the filter/air pump turned off during any spraying.

However, the data is not so clear when it comes to air fresheners.

So, are you automatically giving your beloved fish a death sentence if you use air fresheners in your home?   Not necessarily.

Just because you’ve used an air freshener recently, that doesn’t mean your fish will automatically die.  A lot of factors come into play, such as the specific chemicals in the air freshener you used, how concentrated the air freshener’s formula is, the size of the room being sprayed/diffused into, and how much spray/diffused oil was used in the room or near the tank.

The amount of this chemical in Lysol’s formula is between one-tenth of one percent and two-hundredths of one percent.  If Lysol were sprayed directly into a ten-gallon tank (one spray, not over and over and over again!), then you’d end up with about one-quarter of one microgram per liter of water in your tank, or .25 micrograms, well below harmful levels.

While that doesn’t mean you should go spraying Lysol directly into fish tanks, it does mean your fish will probably be ok if you spray Lysol in the next room.

Other sprayable air fresheners contain phthalates, which can also be harmful to fish and should be used with caution, or not at all, around fish tanks.

If you’re a fan of heavily scented air fresheners and spray them near your tank a lot, you could have some issues with your aquarium.  It’s always best to use the smallest amount necessary and to monitor your fish after using any spray product to make sure they’re okay.

Some tank owners have reported ill effects in their fish after using Lysol or Febreze, so it’s always wise to use caution with any sprayable air freshener.

It seems that marine (or saltwater) tanks are more susceptible to chemical contamination from air fresheners (based on the information available) than freshwater tanks, though it is unclear why.

Don’t panic! If the spray seems excessive, open a window or run a fan (or both) to remove the air freshener’s chemicals from the room faster.  If you have a bathroom or kitchen vent nearby, run that, too, to help pull the chemicals away from the tank and out of the house.

Attic fans can also help draw chemicals out of the house and away from your tank.

Perform a water change as quickly as you can.  Do the largest water change you and your tank can handle, and then do another water change in 24 hours to continue to dilute the number of chemicals that might have been absorbed into the water, and to help remove any film sitting around on top.

Check the pH levels in your tank, as some air freshener chemicals could change the tank’s pH levels.  If your levels are off, treat the tank accordingly.

Monitor your fish for signs of illness for about 24 hours after the spray was used, as well.  If everything looks normal, and you don’t notice any unusual behavior in your fish, then they are probably okay.

How To Protect Your Fish in the Future

It’s always a good idea to cover the tank and turn off filters and air pumps if the area near the fish tank absolutely needs an air freshener for some reason.  This way, you can help minimize any damage that could be caused.

If your tank is in a room with a door, and the air freshener is going to be used in another room, then you can always close the door to the tank room before using an air freshener in another part of your home.

For marine tanks, ensure your protein skimmer is in good shape and that you are cleaning it often enough to handle whatever might need to be removed from the water.

In addition, you could invest in roller mats, filter socks, or filter floss to help ensure that any solid particles from an air freshener get trapped and don’t continue to contaminate the entire tank.  You will need to change filter socks and filter floss once they’ve done their job in order to completely remove any contaminants from your tank.

Of course, the best way to protect your tank is the most obvious way—don’t use air fresheners near the tank!  But, if you really love your air fresheners, you can try to buy products that are organic, green, and have the fewest number of ingredients.

And, follow the tips in this article to protect those fish!

Many air fresheners should be used with caution or not at all.  If your tank has been in a room where an air freshener was used recently, monitor your fish for signs of illness.

If you must spray near the tank, take the same precautions you would with insecticides—turn off the filter and air pump, cover your tank with saran wrap, a large towel or cloth, and wait until the scent has gone away before removing the cover and starting up your equipment again.

Don’t forget about the obvious—opening windows, using air vents, and just closing the door if an air freshener will be used in another room.

How do you make Tap Water Safe for Fish?