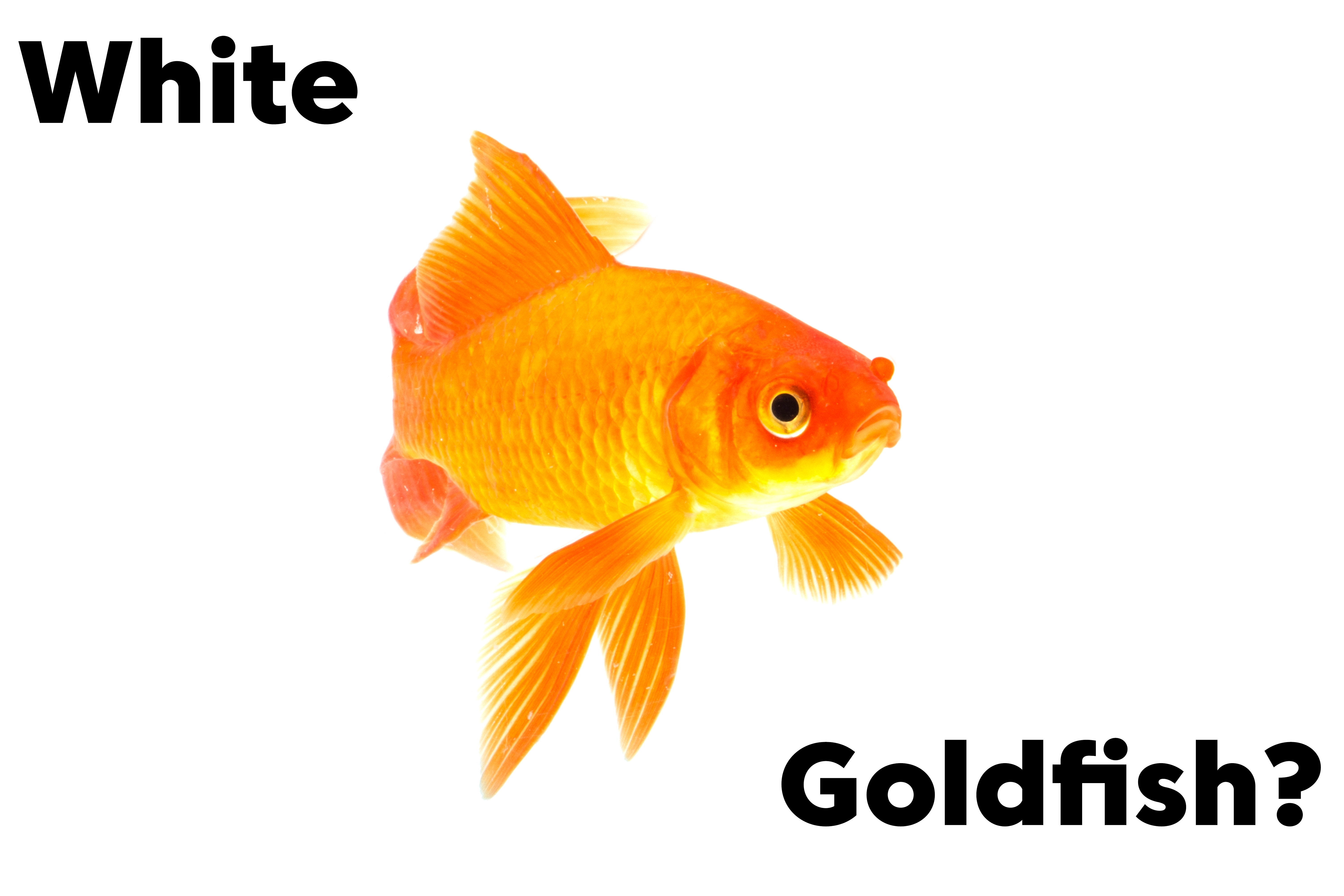 make for popular pets, there is no denying that. They are fairly easy to care for, look beautiful in their aquarium, and are affordable to keep too – what is not to love, right? If you have a selection of Goldfish, then you know all about it. While you might love your brightly colored aquarium at the moment, what if things change in the future? Or what if things have already started changing? Some Goldfish owners notice a change in their fish over time; suddenly their Goldfish start changing color. While the most common color change is from gold to white, you might see other unexpected color changes as well – but that’s a post for another time.

Why do Goldfish turn white?

As you can see, there are a variety of reasons why a Goldfish may turn white or another color (sometimes Goldfish also turn black). To find out why your Goldfish may be changing color, read on.

Most people don’t know as much as they think they do about Goldfish. You hear the word “Goldfish” and you just assume that it is called that because of its natural color, but that is simply incorrect. Did you know that Goldfish were bred for color and were in fact a shade of olive green color before selective breeding became a thing? That is the thing about Goldfish;  in the wild, they are not really gold because they are a type of carp fish that is naturally a shade of olive green. In fact, it is only through breeding programs that red, orange, white, and gold-colored Goldfish were ever actually possible. The Goldfish that you probably have in your aquarium is a result of selective breeding.

Now that you understand a little more about the background of original Goldfish coloring, let’s take a closer look at why your beloved water pet is turning white, what you can do about it, and if you should do anything at all.

Incorrect natural lighting is probably the potential reason that is the easiest one for most people to understand. We probably understand it better, because something similar happens to us. Just like humans have pigment in their skin that makes them darker or lighter depending on how much sun exposure they get, so do Goldfish. When a Goldfish is sunlight deprived or provided with an oversupply of sunlight, its color may fade and it may start to appear white, or it can intensify and become inconsistent (light and dark patches).

Technically speaking, your Goldfish has not turned white if it does not get enough exposure to natural light. It has actually lost its color pigmentation. There are cells that are responsible for the intensity of a Goldfish’s coloring and those cells respond to different light intensities. Which can result in a fluctuation in a Goldfish’s coloring. Even if your Goldfish has not been placed in direct sunlight, this can happen.

If you observe Goldfish that you come across, you might notice that Goldfish out in natural ponds and with exposure to natural sunlight appear brighter than those kept indoors. Sometimes a Goldfish will maintain a consistent color until its light exposure is changed. If you have moved the position of your aquarium or your tank is getting more light (or less) than usual, this could be the problem. This is most often the problem.

What can you do to rectify the problem, if light exposure is the reason why your Goldfish is suddenly turning white? As mentioned above, this usually happens when the tank has been recently moved. It would be a good idea to move the aquarium back to its original spot. Alternatively, if this is impossible, you can try to mimic the same amount of light that the fish previously had by using a high-quality aquarium light.

2. Sudden change in the type of water & environment can make a Goldfish turn white.

You might not know this, but your Goldfish are probably the most sensitive creatures in your home – in fact, they definitely are. While they look as if they are unperturbed by all around them, they are actually sensitive to each and every change that they experience in their environment. They may look happy initially with a change, but with a short bit of time, you might note physical displeasure. One particular way of showing that is to change color.

It’s not as difficult as you think it is to avoid this particular type of problem. If you are worried about it, it is a good idea to keep a written track record of how you manage your aquarium on a day-to-day basis. When you make changes – no matter how inconsequential you think they are – make a note and date it. Keep somewhat of an aquarium journal near your tank, just to make taking notes easier. Once you have a journal in place, you can monitor your activities and how your fish respond to them.

You might wonder what a Goldfish is specifically sensitive to. Generally speaking, a Goldfish can react negatively to things such as a new item of tank décor introduced, a new water type, or a different PH level. Even adding a new fish can cause a Goldfish to suddenly turn white – if it’s stressed or “surprised”. Also, keep in mind that water temperature is quite important. Some experts advise keeping a Goldfish tank temperature at around 23 to 24 degrees Celsius. If the water you provide becomes too cold or too warm, your fish may start to show a change in color.

You might wonder what else you can do to rectify the problem. Sometimes it is all about giving it a bit of time. Assess the situation first, before taking action. If you have introduced a new fish or some new tank décor, give it some time – your Goldfish may settle down. Even if it does not return to its original color, you do not need to worry too much as it is probably perfectly healthy – just make sure that you monitor things and aren’t missing other tell-tale signs that something may be wrong.

If you suspect the problem is a change in the water, consider checking the PH levels regularly with a dipstick. Owning an aquarium comes with responsibility. You will need to check the environment regularly so as to ensure that your fish are never stressed or exposed to unhealthy living conditions.

3. If the Goldfish is ill, it can turn white.

Unfortunately, a white Goldfish can also be a sign of ill health. If you suspect that your fish is unwell (it may have contracted a disease), you should consult with your vet immediately to ensure that you take the correct steps to help it. Healthy fish and sick fish are easy to tell apart, so monitoring your tank can alert you to any changes in Goldfish behavior. Healthy Goldfish will swim fast from one side of the tank to the other (and top to bottom), quickly and without seeming as if they are laboring. Below are a few signs of a sick Goldfish:

A Goldfish can also fall ill from the negative impact of a parasite called Ich. Another name for this parasite is White Spot. If your Goldfish has white spots all over it and it is not a case of the entire scale turning white, then it may be a case of White spots, which can be treated. Make sure that you approach your vet for advice on treatment.

When a Goldfish is born, it is actually quite brown in color. As it matures, it will develop into a gold color. Of course, as the fish continues to age –  and genetics play a major role – the fish can start to change from gold to white. Sometimes all it really is is old age and genetics at play. Remember that Goldfish can live an extremely long time and color changes can occur throughout their life cycle.

What can you do if your Goldfish turns white? At the end of the day, the trick is to provide an environment that is ideal for the health of your Goldfish. If there is sufficient natural light, the water quality is good, and you do not continuously introduce changes or new conditions, your Goldfish should not turn white. If it does, you can use a process of elimination to determine the problem and if it is serious or not. Alternatively, consult with your local vet or Goldfish supplier if you feel that your Goldfish is not behaving normally.

What are the White Dots on My Fish?

Why do Goldfish Turn Black?

What Types of Fish Can Live With Goldfish?