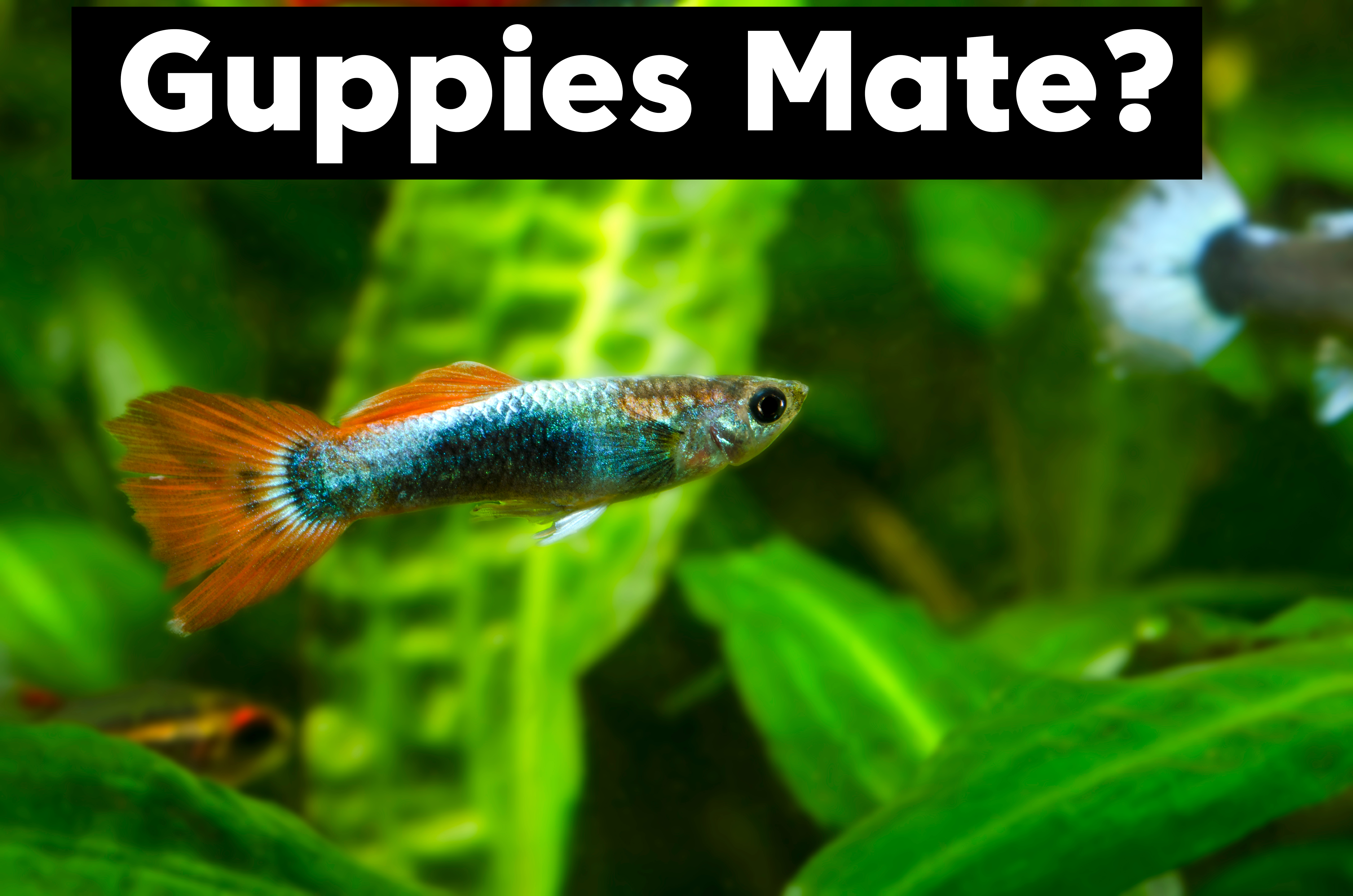 Many people choose to add Guppies to their aquariums and small garden ponds. This makes great sense. That’s because not only are Guppies a colorful species of hardy fish with beautiful tails and interesting personalities, but they also are surface breathers that eat algae and help control mosquito populations too. There is only one drawback to having Guppies in an aquarium or garden pond. They are a species of fish that breeds very quickly and can rapidly overpopulate a fish tank or garden pond if someone does not take steps to prevent this. With that in mind, I will talk a little more about how Guppies actually mate.

How do Guppies Mate?

The whole mating process takes little or no time at all to accomplish. There is nothing fancy or extravagant about the way that Guppies mate. As a matter of fact, there is little contact at all between the male and female.

It’s thought that males of the species have the distinct ability to determine if a female Guppy is already pregnant or not.

The best place to start when talking about how Guppies (Poecilia Reticulata) mate is to know a little more about the male and female of this fish species.

The recently born offspring of Guppies are called fry.

Guppies Are Not Usually Reluctant Breeders

If someone wants to breed their Guppies it’s usually not a big problem. As was mentioned, they are very willing breeders and intermingling between different types of Guppies is never a problem either. They tend to breed even more easily in garden ponds than they do in aquarium tanks. As a matter of fact, most people who raise Guppies find it harder to keep them from breeding than to get them to breed. It’s a pretty safe bet that when a mature female and male are in the same vicinity a pregnancy will take place.

There is an Old Wives’ tale going around that Guppies can reproduce asexually too. The reason for this is because there are instances of female Guppies giving birth in aquarium tanks and garden ponds where no males are present. Although Guppies are certainly not capable of asexual reproduction, the females are able to carry male sperm inside of them for up to 6 months at a time. This will enable them to fertilize several batches of eggs over that time period without the presence of a male Guppy. The confusion is quite understandable in this case.

How Does Someone Know If A Guppy Is Pregnant?

This is not the easiest question to answer. That’s because female Guppies tend to always be pregnant if there are males in the same area (unless they are infertile). They really are that efficient when it comes to breeding. There are a few telltale signs that pregnant Guppies display. One, of course, is the fact that a female Guppy’s belly will grow noticeably bigger when she is pregnant. It will also become much more rounded than usual.

A female Guppy’s gravid spot changes too when she is pregnant. It will become much darker than usual as the fry starts to grow inside her. Gravid spots are distinctive only to fish that are livebearers such as Guppies.

Guppies Do Not Lay Eggs

One thing that people do not have to worry about when Guppies mate is the males of the species or other predators in a tank or pond eating the eggs before they hatch. Guppies are ovoviviparous. That means female Guppies once pregnant keep the eggs right inside of them. Baby Guppies get nourishment from these egg sacks until they reach maturity and hatch. Once the egg sacks have broken open, after a short period of time the female Guppy will then give birth to the live fry. This gives Guppy fry a better chance of survival than fry from species of fish that lay eggs.

What Is The Typical Gestation Period For Guppies?

It was mentioned that Guppies are pretty ferocious breeders that do not need much encouragement to mate, even when confined in a fish tank. This combined with their relatively short gestation period means someone can increase the Guppy population in their aquarium or garden pond relatively quickly.

Amazingly, Guppy embryos are almost fully formed within 4 to 5 days of an egg being fertilized. Female Guppies will give birth usually within 21 to 35 days after she has been impregnated by the male Guppy sperm.

How does someone know when female Guppies are about to give birth? They actually exhibit some characteristics and behavioral patterns that will help a person to tell when this is about to happen.

One thing that has been noted several times is that a pregnant female Guppy’s belly will change from being rounded to somewhat angular a day or two before giving birth. They also will tend to separate themselves from the other fish in the tank and hide among the vegetation in a tank or garden pond. These are not normal behavior patterns for guppies.

Female Guppy skin is also a little bit translucent in their belly area. So if someone looks closely, they may be able to see the eyes of the fry appear a few days before the female gives birth.

How Often Do Guppy Females Get Pregnant?

The females of the specious are true warriors as far as breeding is concerned too. They are able to start the whole breeding process over again immediately after giving birth. This happens especially quickly if a female Guppy still has sperm from the male stored inside her as is often the case. Guppy breeding is almost a never-ending process because of the ability that female Guppies have to store sperm.

Watch Out For the Males after Birth

If someone is trying to increase the number of Guppies in their garden pond or fish tank, it may be a good idea to remove the males from that body of water after the fry is born. Male Guppies are known to be very hardy eaters of fry once they are released from inside the females. If someone does not want to go to the extent of trying to move their males out of the aquarium or backyard pond, the more vegetation and other places for the newly born fry to hide will increase their chances of survival. Keeping the Guppies and other fish in an aquarium or garden pond well fed will also discourage them from eating newly born Guppy fry and other young fish.

How to Prevent Guppies from Breeding?

If a person wants to separate their male and female Guppies so they don’t breed, they had better do it early on in their growth cycle. Female Guppies are able to breed when they are only 3 to 4 months old; so decisions have to be made about breeding very soon after the fry are born.

Selectively Breeding Guppies Can Be Done

Many people who like to raise Guppies in their garden ponds are aquariums have had success selectively breeding them.

To selectively breed Guppies all a person has to do is choose males and females with similar characteristics. For example, if someone likes a particular color of Guppy, they just choose a male and female that has that same color. The same also applies to tail shape and size.

In order to do this, a person will have to separate the male and the female they choose from the rest of their Guppies and put them in a separate breeding tank. The breeder will also have to make sure the female is not already pregnant. This, as we mentioned, is not always the easiest thing to do because of female Guppies’ ability to store male Guppy sperm for up to 6 months at a time. So part of selectively breeding Guppies is a crapshoot if someone has more than one Guppy variety in their aquarium or backyard pond.

Rare Guppy Breeds (These are Weird)