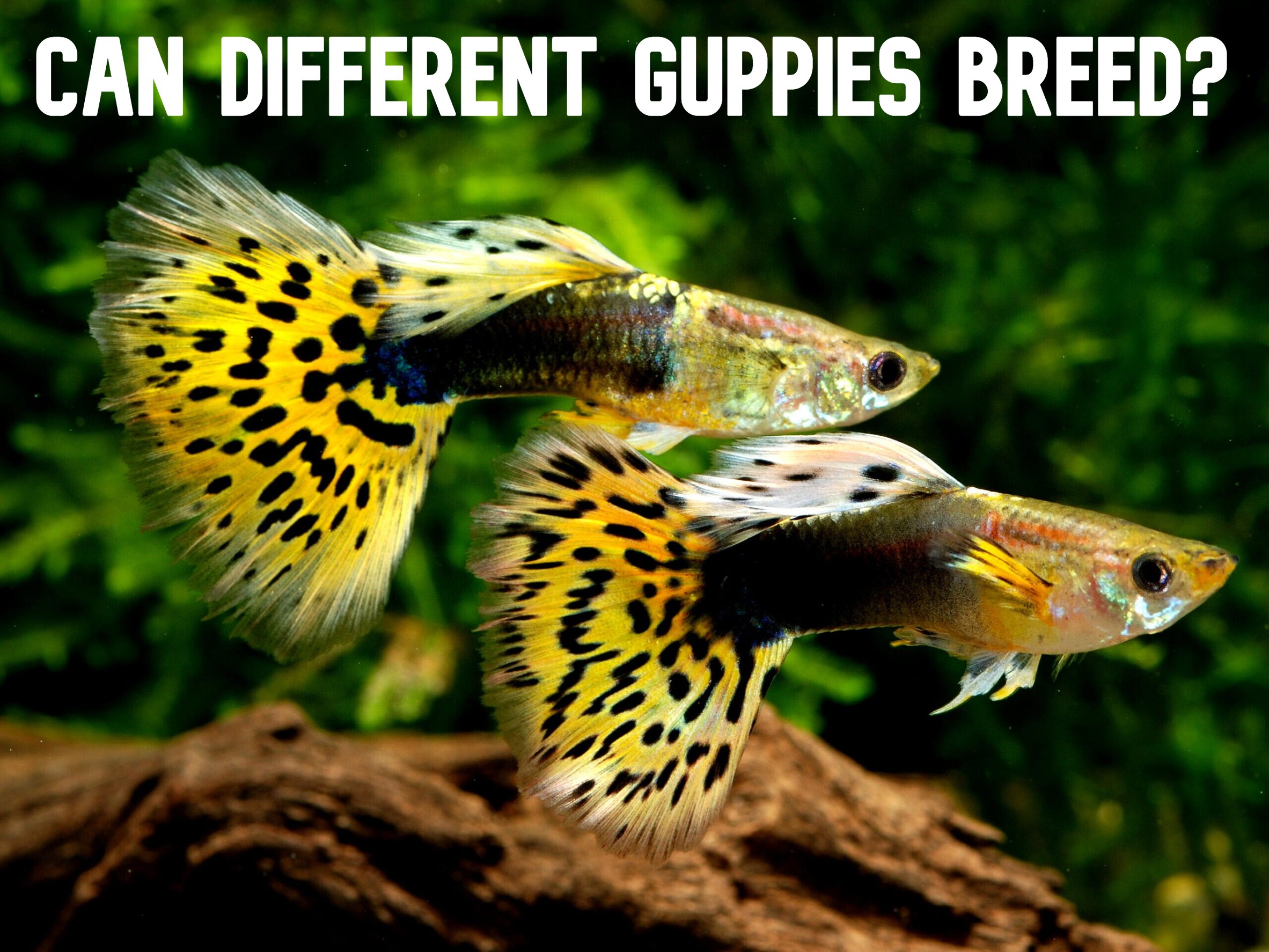 Anyone who has had at least two guppies in their tanks at a time has probably witnessed the appearance of fish fry from out of nowhere. Guppies have an amazing breeding capacity and do not normally need any encouragement from the aquarist.

But just as there are tons of fish fry, there is also a long list of the types of guppies available. And because they’re each visually appealing in their own way, it’s easy to want to pick and choose a variety of guppies to add to your aquarium. It leaves many potential guppy owners to wonder, “Can different types of guppies breed?”

The short answer is yes, but it’s not always recommended. Whether this is something that you’re hoping for, or if you’re trying to keep from having an unintentional, continuous guppy nursery you’ll want to read through the rest of this article to find out for sure.

The ‘birds and the bees’ concept is also true for guppies. They mate throughout the year, as opposed to seasonally, using sperm and eggs created within the testes and the ovaries.

Guppies are dioecious, meaning the sexes are separate. They’re also considered sexually dimorphic, meaning that it’s pretty simple to tell the difference between a male and female guppy:

Have you ever wondered how a female guppy seems endlessly pregnant?

When the male and female are ready to mate, the male quickly transfers spermatophores (sperm package) into the female. Once inside the female, the packet separates into different pockets of sperm, which she then stores as separate, multiple broods. Depending on how many broods she has created within her body, each brood will gestate, and she’ll give birth about once a month.

You can visualize it being like a reproductive factory line. Once a brood is born, then the gestation period of developing organs starts all over again in the next brood, and the process repeats until all of the broods have been born. Because they are born live from the mother, they are considered livebearers.

Livebearers like guppies are the easiest type of fish to breed because they don’t need help from the fish parent (you). But it’s still important to know the difference because if you’re expecting to combine different types of fish in your aquarium that have the capacity of breeding, you’ll want to know immediately. Knowing whether the fish is a livebearer, or an egg-layer can tell you if the fish are capable of breeding. Here’s the difference:

Aptly named, these types of fish lay their eggs instead of developing them inside of their bodies. Barbs, danios, and betta fish are just a few of the types of egg layers that aquarists like to raise. As you learned from the previous section, guppies give birth to live young, therefore they are livebearers. You can have egg layers and livebearers together in a tank without fear of breeding.

Livebearers, also known as ovoviviparous, develop their fish fry in eggs within their bodies. The young receive nutrition from the egg’s yolk. The female gives birth to live, free-swimming offspring. Livebearers are often peaceful, resilient, and easy-to-care-for fish that include the Poeciliidae family. This family includes mollies, guppies, platies, and swordtails.

Livebearers and egg-layers cannot breed due to genetics and their reproductive systems. The same goes for breeding different species of livebearers with other livebearers such as platys with guppies – it’s just not physiologically possible. However, any type of guppy can breed with another guppy.

Breeding guppies has become almost like an Olympic sport with many aquarists. I go into much deeper detail about guppy varieties in my article Rare Guppy Breeds. Like grains of sand on the beach, there seems to be an endless variety of guppy types. The two most common types of aquarium guppy species are the Fancy Guppy and the Endler Guppy. These two, types of guppies are also known by:

There are other types of guppies that are selectively chosen for their eye colors and pectoral fin shapes and colors. Just like with any animal species, there is also a mutt guppy, which is considered more genetically diverse, but has “unstable lines.” This means they are much less desirable or impressive than selectively bred guppies that you would see in competitions or hardcore aquarium tanks.

Successful Breeding… or Just Say No

So now that you have a good idea of the breeding tendencies of guppies you may be on the fence as to whether you want to try your hand at breeding them. A couple of tips to know if you want to have a successful breeding attempt is to have similar strands and to be prepared for cannibalism. Alternatively, you may just want to opt-out completely from any hanky panky in your tank.

Even though there are so many types of guppies, they will still all breed with one another despite their differences. It’s just not always successful. This is due in large part to inbreeding – continuous breeding with cousins, brothers, sisters, etc. If you’re looking to produce quality fry, make sure you are purchasing quality parents. Or try to make sure that as your tank population grows, the family members aren’t continuously mating with each other.

Another way is to breed similar strands of guppies, so they don’t turn into interbreeding mutts. Breeders are continuously creating new strains of guppies, and have much more experience with adding colorful stripes, spots, splashes, and ranges of fin types. To keep it simple, find a strand of guppy that you like and keep them from interbreeding and inbreeding.

Yes, it’s true. Guppies eat their young, and very quickly. If you’re expecting a brood of fry, you’ll want to separate the adults from the offspring as soon as possible. There are plenty of breeding tanks and nets on the market, and you’ll want to have lots of hiding places available if you don’t separate them from the adults.

This cannibalistic attitude is known as filial cannibalism and is normal with many types of fish. Guppies are not model parents, and in fact, they exhibit no post-natal care at all. Some experts believe that they eat their own offspring because it helps to weed out the weaklings. From a survival perspective, the adults are flexing the “survival of the fittest” tactic.

Another belief is that the female is eating her offspring to replenish her fat storage. It doesn’t give us a clear indication as to why the males will also eat their young, so perhaps it’s a little of both.

Some ways to make sure that you will not have any fish fry unexpectedly appearing in your tank is to:

If you do end up with some fish fry surprises, don’t ever release them into the wild. Not only is releasing non-native species considered a crime in many places, it is also extremely catastrophic to ecosystems, despite how small and fragile the fry may seem.

Other options are letting nature take its course within the tank (meaning many will likely get eaten) or selling them or giving them away. It’s easy to make a simple post on social media or online trading sites, and you’ll most likely get a bite or two, so to speak.

Guppies are easier to breed than rabbits. The females have evolved into breeding machines where they can have separate brood pouches ready to be born every month for several months. Because different types of guppies can breed with one another, the results can be dependent upon which varieties you have in your tank. By now you should have a good idea of the breeding capabilities of guppies and how you can define your broods or keep them from breeding altogether.

Rare Guppy Breeds (These are Weird)