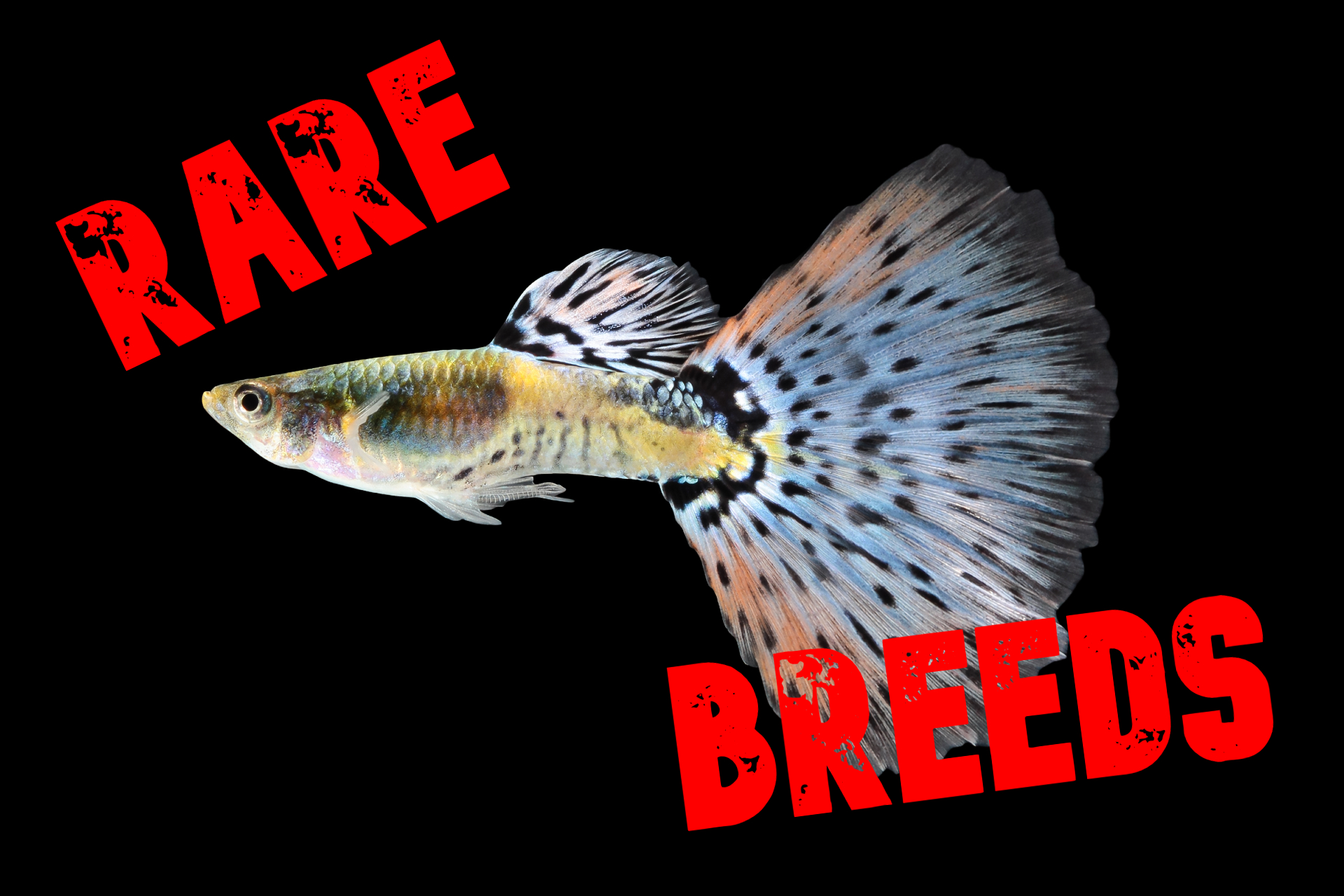 The term rare is used when an event, situation, or condition doesn’t occur very often. Merriam-Webster dictionary says that something is considered rare when it is uncommon or, “marked by unusual quality, merit, or appeal.”

Some people make it their life’s work to collect rare objects, such as antiques, baseball cards, or artifacts. Other people dedicate their time to studying and collecting rare specimens, like gems, plants, and animals.

Believe it or not, the world of guppies is no different. Most people may not realize there is a population of guppy enthusiasts who spend tremendous amounts of time finding, breeding, and entering competitions with some of the rarest guppies on Earth.

And to think that guppy enthusiasm began with the breeding of a small South American fish that had only a touch of vibrant fin coloration. Now there are well over 300 different varieties of guppies that are sometimes so uniquely gorgeous they’re akin to an aquatic character in a fairy tale.

These guppies aren’t your typical pet shop fish. They’re incredibly rare in the eyes of a novice and to some advanced breeders.

So, what are the rarest guppy types? Honestly, there is no easy answer as the strategies for creating the most unusual and beautiful guppy is continuously evolving. It’s easy to become mesmerized by these flowing creatures, but there is a whole science and specific standards involved in making them this way.

Here, we’ll take a peek into the basics and business of rare guppies.

The Basics and Business of Rare Guppies

Guppies are said to have been originally “found” in Trinidad by a conchologist and geologist by the name of Rev. Robert John Lechmere Guppy. When he sent the small fish to London, a German-English ichthyologist gave it the official name guppy as a tip-of-the-hat to the reverend.

Unbeknownst to them, the same fish but female had already been found in Barbados and Venezuela several years earlier. It had been described and catalogued as what we now know as Poecilia reticula. Poecilia means variegated, while reticula is in reference to the lacy, network-like patterns on the body.

While guppies were eventually exported and used as mosquito control, other people were slowly becoming guppy hobbyists, especially after seeing how impressive the reproductive rate is (hence, its second name, the million fish) and how specific breeding methods provide a beautifully desirable result (hence, its third name the rainbow fish).

This was the beginning of the fancy guppy enthusiasm. Leading the way at the first International Guppy Show in 1954 was the Veil Tail guppy and later the Coffer Tail guppy. These names may not mean much to a novice, but to past, current, and future guppy aficionados, they paved the way for the ongoing evolution of rare guppy breeds.

As mentioned before, there are around 300 different types of guppies, and some experts may boast even more. When figuring a type of guppy, breeders classify them by color, body and tail patterns, and fin type.

There are around 12 types of tails that are recognized by guppy associations listed in the next section. The most common are:

The body and tail pattern on a guppy is one of its most admirable and distinguishing features.

Guppy’s coloration is the first main attraction. The three main types of colors are metal, solid, and albino, but also includes two others used by guppy associations. The colors are awe-inspiring, especially when coupled with body and tail patterns.

Rare Guppies and What Makes a Guppy Rare

Scientists affectionately refer to features of different types of guppies as strains, which is a genetic variant or subtype of the organism.

Strains are important to breeders because it helps them use successive selective breeding, which involves breeding guppy parents with specific traits so they can produce offspring with uniquely desirable results.

If one were to peruse the competitions or archive photos of IFGA registered guppies, you would think that every guppy listed was an anomaly, but in fact, it’s a trivial example of Einstein’s theory of relativity. This means, to a novice, these guppies are extremely rare because they are so uncommon and never seen in a typical pet shop.

To a breeder, however, many – but not all – of the show guppies are reasonably common. For them, it seems to be more about the product of meticulous breeding strategies.

For example, the coloration of a guppy is taken into high account when the breeder is entering it into a show. The True Green guppy is said to be a very desirable strain because it is challenging to develop. They must be mixed with blue and green iridescence for the angle of the light to reflect it a certain way, or it can be disqualified. Green guppies are in high demand and are often very expensive.

Another difficult strain to develop and maintain is a Half Black Green, which is a green guppy with what’s called a “half-black” body trait. To be considered, the Half Black Green must have a dark half black body with fins maintaining a beautiful, shimmering green coloration.

When considering body patterns with colors, the Solid Blue Tail Snakeskin can be a rarity, as can the Yellow guppy that is genetically gold with gunmetal head traits. The blue variegated cobra is also known as the Galaxy Blue Glass guppy and is a fourth-place rarity in the World Guppy Contest.

Less rare but hard-to-find guppies are the Platinum Dumbo Red Mosaic Guppy and the Dwarf Blue Panda. Red Eye guppies are difficult to come by because not only do they have red eyes, but they’re not considered albino.

As one guppy forum member states, when a new variety of guppy is made, they’re automatically considered rare. Once they’re released to the public, however, they become more mainstream, and the price decreases dramatically, depending on their location.

There are no two guppies that are alike. Guppy hobbyists have turned breeding guppies into an art form, to which international associations were formed to classify the most unique and desirable types. As most people who have owned guppies know, it’s effortless to breed these beautiful, hardy fish. To create rare strains, however, you would need to do plenty of research and contact guppy associations and breeders.

But if you’re like most people, just being able to witness extraordinary results of successive selective breeding is enough. Maybe it’s time to look into buying tickets for the next global guppy show.

How Do Guppies Mate?