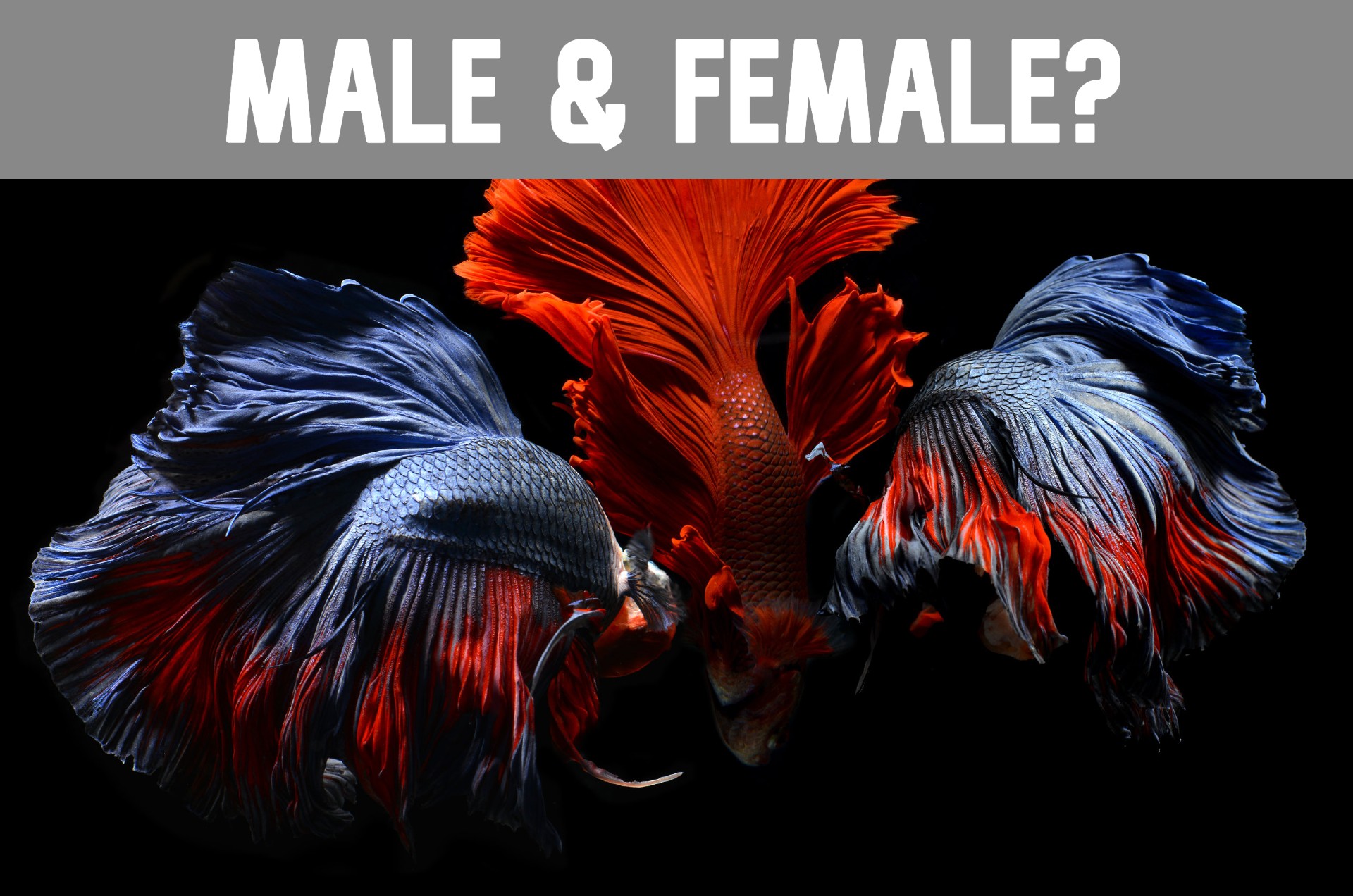 If you have ever considered owning a Betta fish, you are probably aware that they are marketed as solitary fish. Bettas, also known as Siamese fighting fish, get that reputation for a good reason. These fish, especially the males, are very territorial and will flare out their gills in a dramatic display when faced with a competitor (even their own reflection). Placing two males in a tank will cause them to attack, injure, and sometimes kill one another. However, if you are intent on adding a tank mate to your Betta’s aquarium, you might be wondering if a male and female Betta fish can live together?

Technically, yes- it is possible for a male and female Betta fish to live together in the same tank. However, Bettas by nature are solitary species and the risks of keeping a male and female together outweigh the benefits. Even if you take every precaution to set up your tank for success, there is still a pretty big chance the fish will not get along- and even if they don’t attack each other, the stress of living with a competitor can make your fish sick and lethargic. If you are willing to take that risk, there are extra steps you can take that might make it easier for a male and female to coexist– but I would recommend this for experienced fish keepers only.

Single fish or a community?

There are two ways to go about keeping a male and female Betta together: a single male with one female, or a single male with multiple females. Your decision will probably be dictated by the size of your tank- though either way, you will need a large space. There are pros and cons to each option to consider, and here are the basics.

Whether you have decided on a pair of Bettas or a full community, you will first need to ensure that you have a large enough tank. A single male and female housed together will need a minimum of 40 gallons, and a community will need a minimum of 75 gallons. This might seem like overkill for such small fish, but providing ample territory space for each fish is the key to keeping the peace among Bettas.

In addition to tank size, the shape is also important. When keeping multiple Bettas, you should opt for a long, horizontal-oriented aquarium. This will give you more surface area, as well as more ground space for plants and decorations that will provide your Bettas with some cover. In order for Bettas to feel comfortable in their space, they will need to have space where the other Betta is not in their line of sight. Breaking up the space with lots of plants, caves, and rocks not only keeps their competitors out of sight but provides hiding places for fish who are being bullied. The horizontal aquarium setup also makes it easy to add a tank divider in the event of an emergency.

Now that your tank is set up, it is time to think about the best ways to introduce your fish. Since Bettas are territorial by nature, the introduction to their new space is very important. Fish that are introduced all at once will likely fight each other to establish dominance. To avoid this, it is best to introduce them slowly. Using a tank divider, breeding box, or even a clear bag, put both fish in the tank where they can see each other, but are separated. It’s likely that they will flare their gills for a while, but keep an eye on it. If they settle down after a few days, you can proceed with the next step. If they don’t settle down, it is likely that they are not a good fit for living together, and should be kept separate.

The next step is to release them into the tank together. Flaring should be expected at first, but ideally, they will settle down in order to find their own territory. It is important to keep a close eye on them during this time- if left alone, you might come back to an injured fish. If they don’t settle down in a few hours, or if they start attacking each other outright, separate them immediately.

Introducing a male Betta to a group of females is a little more tricky. The females should be introduced to the tank first, as they will establish a pecking order amongst themselves. There might be some aggression, but ideally, if the tank is large enough they will settle into their hierarchy. When you are ready to add the male, remove all fish from the tank and rearrange the surroundings before adding all of the fish back. The females will be established with one another, and the male will likely only interact with the most dominant female. Since the tank has been rearranged, most of the fish will be eager to find a new territory and will hopefully leave one another alone. If the male becomes aggressive to the females, it should be removed immediately. It is also worth noting that when a male is added to a group of females, the females can become competitive with one another for the male’s attention. Even a peaceful Betta sorority can become aggressive to each other when a male is introduced. In this case, it is also necessary to remove the male Betta.

As you can see, even with the most careful planning, there is no guarantee that your male and female Bettas will get along. As the fish owner, it is your responsibility to have a backup plan in case things don’t work out. Keeping two fish together to compete and fight with each other is unethical and cruel, so you must be prepared to house both fish separately if the need arises.

Tank dividers are a great way to separate two Bettas without having to shell out for a separate tank. They also have the added benefit of allowing you to view both Bettas in the same tank- they just won’t be able to attack one another. If you are separating your tank, it is worth noting that females prefer more space than males. If dividing up a 40-gallon tank, a male will be content with 10 gallons of the space, leaving the female with the larger territory.

One of the reasons a Betta enthusiast might be interested in keeping a male and female Betta together is for breeding purposes. Breeding fish can be a complex thing for any fish keeper, and Bettas are even trickier given their territorial tendencies. Most Bettas who are kept for breeding are actually kept in separate tanks and moved to a special breeding tank for laying their eggs.

If you keep Bettas together and they breed without your interference, it’s important for you to remove the female as soon as she lays her eggs. Otherwise, the male will see her as a threat to the eggs and attack her.

Once the eggs hatch, it’s also important to remove the fry from your Betta tank, as they can be eaten by their parents. The fry can be kept together until they reach a certain size, but then you will have to separate the males (and most likely, the females as well).

If you are worried about the risks of housing your male and female Bettas together, but would still like multiple Bettas in your aquarium, another option is to keep females only. This is referred to as a sorority tank, and although there are still risks of aggression, females are more likely to get along with each other without a male present.

Sororities will still need large, wide tanks, plenty of hiding places, and slow introductions to one another. It’s also worth noting that there should be at least 4 females so that a hierarchy can be established without too much aggression.

In conclusion, while it is possible for multiple Bettas to be kept in the same tank, it’s risky and a difficult thing to accomplish, even for seasoned aquarists. In truth, Bettas are solitary creatures by nature and will be very happy and fulfilled when kept alone. However, if you have the space and want to add other fish to your tank for your own benefit, there are other species that have been known to live peacefully with Bettas: plecos, corydoras, snails, and ghost shrimp are all interesting additions that won’t cause a fuss with your Betta. As long as you do your research and take the time to prepare, you will surely find a peaceful tank mate for your Betta.

How Long Can a Betta Fish Live? 4 Tips to Increase their Lifespan

Why Betta Fish Bowls are Cruel