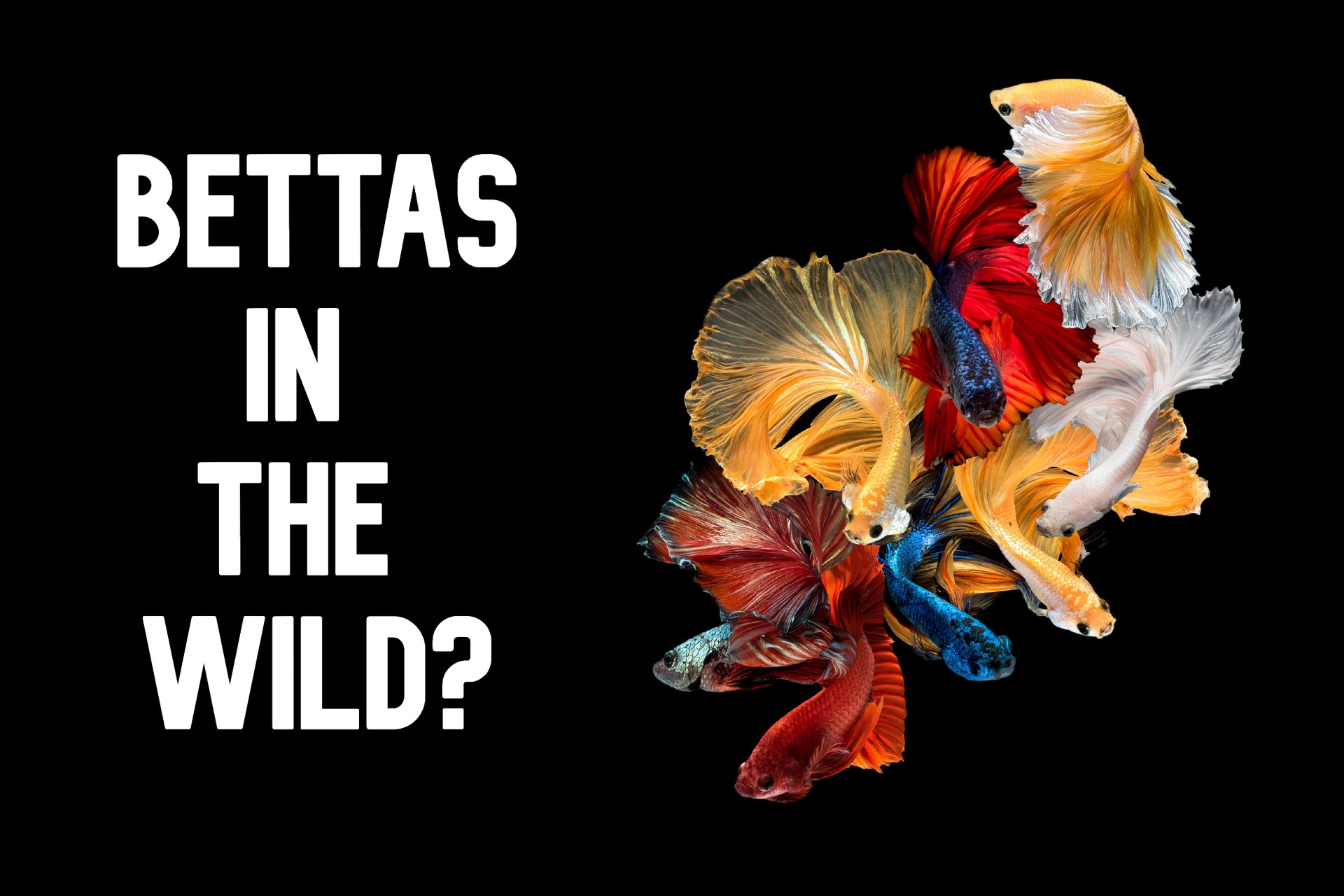 Betta fish are one of the most popular species of aquarium fish in the world. They have unique personalities, are relatively low-maintenance, and come in every color of the rainbow. They don’t grow to be very big and can live their entire lives in a 5-gallon tank. They are a great choice for beginners due to their hardy nature, with several unique characteristics that they evolved to thrive in their natural habitat.

Betta fish originate from the Mekong river basin, in parts of China, Myanmar, Laos, Thailand, Cambodia, and Vietnam. There is a myth that these fish evolved to live in mud puddles, making them suited to life in a fishbowl or vase. This is simply not true! The real natural habitat for a Betta looks more like a shallow, still, river inlet or rice paddy, filled with plenty of vegetation and insects for food. The shallow habitat means that the water is kept warm- a necessity for a happy Betta. In the wild, a Betta’s territory can reach 3 square feet- much larger than a fishbowl or mud puddle.

Bettas possess a unique organ called a Labyrinth, which acts as a rudimentary lung. Since their natural habitats are shallow, dry seasons and drought can often lead to the water drying up. The labyrinth organ allows Bettas to take oxygen directly from the air, buying them some time to find a larger water source during these periods. The canals, floodplains, and rice paddies that Bettas live in are often connected by smaller streams. In addition to the labyrinth, Bettas also feature an excellent jumping ability, which allows them to navigate between these smaller patches of water.

These unique characteristics are adaptations that Bettas developed over hundreds of years in order to survive in their natural habitat. It’s important to remember that surviving and thriving are very different things. Although a Betta can survive in a puddle, it is not something it was programmed to do long-term. If you are using these adaptations as an excuse to keep your Betta fish in a small bowl or vase, you should reconsider.

Betta fish that are available in pet stores today are a domesticated breed of Betta fish, Betta Splendens, and are quite different from their wild cousins. Wild Bettas tend to have a dull green and brown coloration, while domesticated Bettas have been bred in a multitude of colors. Additionally, wild Bettas have shorter, rounded tails that are more practical for their habitat. Domestic Bettas have also been bred to feature many unique tail shapes and lengths that are beautiful to look at.

Some pet Bettas have tails that are longer than their bodies. These long-finned varieties, such as rose tails or dumbos, can often have tails so long that it’s difficult for them to swim properly. Luckily, Bettas that are kept as pets do not have to be as fast as their wild counterparts- there are no predators or competitors to escape from, and the food never has to be chased. With that in mind, your pet Betta will be much happier and healthier if the aquarium it lives in is as similar to its natural habitat as possible.

Keep in mind that Betta’s natural habitats are shallow and warm. When searching for the perfect fish tank, try to get one that is horizontal instead of vertical. Vertical tanks take up less table space, but they limit the surface area for your Betta to explore. The orientation of a vertical tank also means that it will be deeper than a similarly sized horizontal tank. A deep tank means that the water temperature can fluctuate at different levels, which could be uncomfortable for your Betta.

Since a Betta’s natural territory is about three square feet, it’s important to give your Betta fish a big tank. There are many aquariums that are advertised as being perfect for Betta fish that are 2 gallons or less! Those tanks are too small for any fish to thrive and are much harder to maintain. A smaller tank holds less water, so any changes to the water quality happen fast. Small tanks often need to have water changes weekly and can be impossible to establish a colony of good bacteria to benefit your fish. The minimum tank size for one happy, healthy Betta fish is 5 gallons. Make sure that you choose an aquarium that comes with a lid! The same instinct that wild Bettas have to leap from puddle to puddle is still very active in pet Bettas. They have been known to jump out of a fish tank without much warning- a lid will protect them from hurting themselves.

Filters are important to the health of any fish tank, especially if it’s on the smaller side. Since Betta’s originate from shallow water that is very still, it’s important to choose a filter that has a low current. Bettas, especially ones with long fins, can’t tolerate a strong filter with a heavy current. They can easily get pulled around by a filter, and some can even get stuck. A sponge filter is a great and affordable option for most Bettas since the sponge dampens the current and prevents any fins from being sucked into the filter.

A heater is also necessary for any Betta tank and is something that’s easy to overlook. The natural habitat of a Betta fish never dips below 50 degrees, even in the wintertime. The desired water temperature for a Betta fish is between 73 and 80 degrees. Any cooler than that and your fish will likely appear tired and slow. There are plenty of heaters that are small and easy to fit in a little Betta tank. You can also attach a thermometer to the side of your aquarium to keep an eye on the temperature yourself. Keep the tank away from the window, which can cause a chilling draft.

The natural habitat for a Betta is also full of vegetation and insects to eat. Bettas love to hang out at the warm surface of their aquarium and having lots of leafy plants will give your fish some cover. Many Bettas will even use a large leaf like a sofa- it’s not uncommon to find your Betta lounging around on one. Be sure to use either real plants or silk plants in your aquarium, since they have a nice, soft texture. The hard-plastic aquarium plants that are often used can be too hard on the long and delicate fins of the Betta- even leading to tears and injuries. Insects such as bloodworms, flightless fruit flies, and brine shrimp can also be added to your tank on occasion as a delicious snack for your Betta. Feed them sparingly, as these are a treat food!

Domesticated Bettas are sometimes referred to as Siamese Fighting Fish, due to their territorial nature. Male Bettas can’t be kept together, as they will fight to the death, and it’s also dangerous to keep a male and female together. So how do wild Bettas survive when they are surrounded by others?

In the wild, there are no boundaries of a fish tank to keep a Betta from running away to find a safe hiding place. Although Bettas will often run into each other in the wild, they still establish their own territories where they don’t have to interact with other fish. During mating times, males build a bubble nest on the surface of the water to attract females. Once the eggs are laid, the female is chased away by the male, who continues to guard the eggs vigilantly. Pet Bettas, when being raised by breeders, need to be separated right away after laying the eggs for this exact reason. Males are so protective of the eggs that they will kill the female if she is kept in the same tank. In the wild, the female is able to get away freely without injury.

Betta fish in the wildlife in the tropical shallow waters of east and central Asia. The shallow and warm waters of streams, floodplains, and rice paddies offer the still currents and vegetation that Bettas need to survive and thrive. Although Bettas have several unique adaptations that help them live in puddles, these are survival tactics and are not meant to be a way of life for pet Bettas. Betta fish should never be forced to live in a tiny bowl or flower vase and need a minimum of a 5-gallon tank with a filter and heater. Plants and occasional live food treats can give pet Bettas a similar life to their wild counterparts. Even in their natural habitat, Betta fish are solitary species and should not be kept together in most cases. Bettas are a great pet and are suitable for beginner fish keepers. If you offer them an aquarium setup that mimics their natural habitat, they are sure to live healthier and longer lives.

Best Betta Fish Tanks for a Healthy and Happy Pet

How Much Should You Feed a Betta Fish?