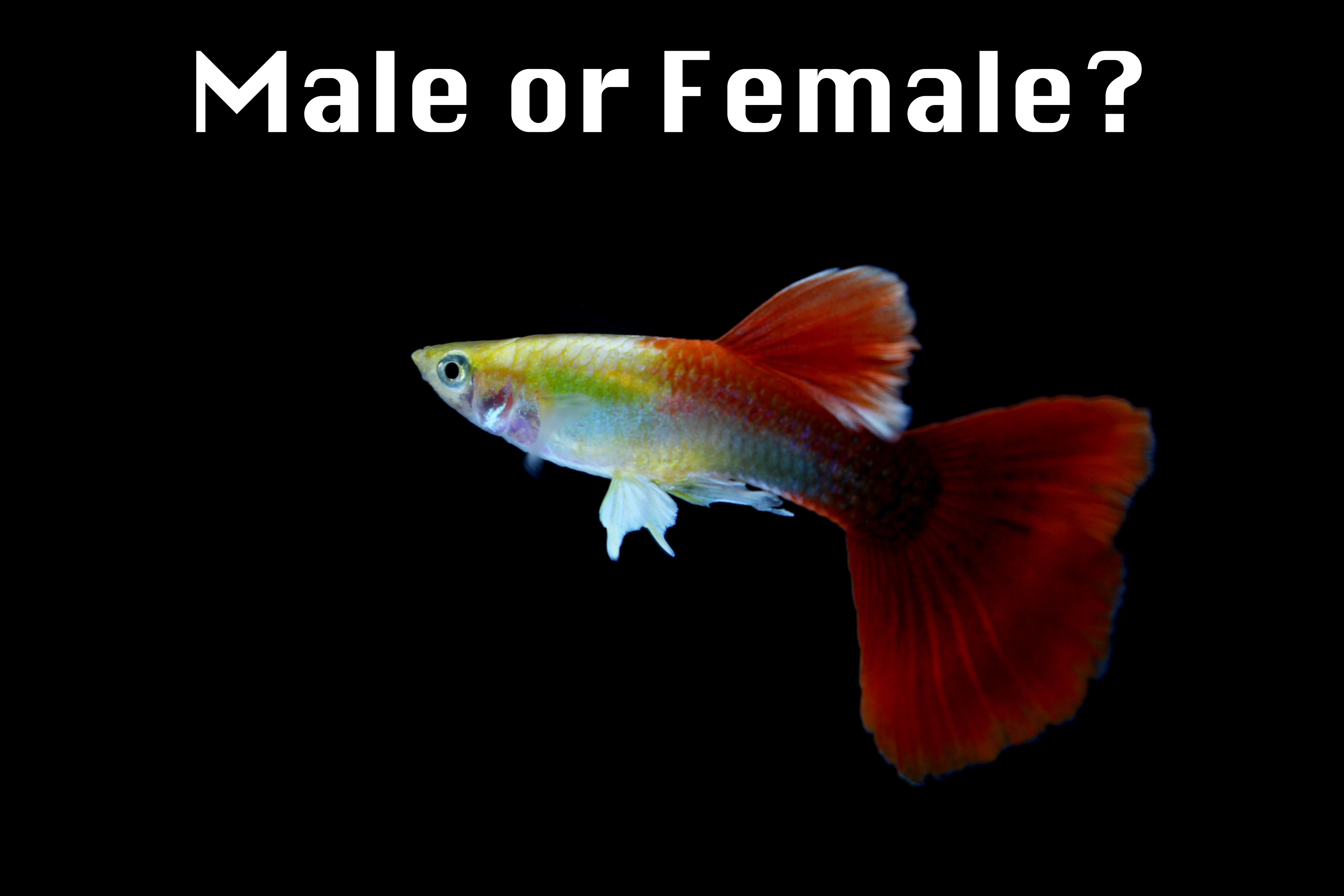 It is not surprising that you are considering investing in a few guppies. In fact, they make for wonderful aquarium pets and are quite popular for their flashy colors and easy maintenance requirements. Most people know that when male and female guppies co-habit, they breed fairly quickly – this is another reason for their popularity. If you have guppies, you might want to know what you are dealing with in terms of genders. Telling your male and female guppies apart might seem like an impossible task, but it is actually quite easy. You will need to wait until they are at least 1 week old and then you can examine their color, fins, and body shape. Soon, all will be revealed!

How to Tell if a Guppy is Male or Female in 4 Easy Steps:

Telling the sex of your guppy may seem complicated in the beginning, but once you know what to look for, you should be able to determine guppy genders with relative ease. Below we discuss what to look for in each of the 4 steps mentioned above and how to definitively tell if your guppy is a male or female. Let’s find out what you are dealing with…

The first thing to take a look at is the overall shape of the guppy. While at a first glance you may think that both male and female guppies look the same; they actually do not. On closer inspection of male and female guppies, you will find that their bodies have quite different shapes. A female guppy is generally round when compared to the male guppy, which in comparison looks longer and slimmer. You might wonder why one of your guppies looks double the size of the other. Do not worry – this is probably just because one is male and one is female. A round female guppy should not be assumed to be pregnant. Pregnant females actually have a very bumpy appearance, so keep that in mind.

Color is another very important deciding factor. That being said, it must be noted that color is a tricky tell-tale sign to work with. This is because some guppy varieties only have brightly colored and patterned males, while other varieties have colorful males and females. So, it can get confusing to know for certain whether the bright, flashy guppy you have in your aquarium is definitely a male or female. If the guppy has bright colors and many patterns, you can start to think it is a male. However, you should only assume it is a male if it has other male characteristics to pair with the bright colors and patterns.

Step 2: Measure the size of the guppy.

As already mentioned above, most female guppies are big and round. That is their main design. Females are generally much bigger in size than males, but as with most things, this is not always the case – it is not an exact science. You can get a small female or a large male. It is a good idea to try to get as accurate a measurement as possible on your guppies. Most male guppies grow to around 3 cm in length, whereas the females grow to double that: 6 cm! It is fairly safe to assume that the bigger guppies are females and the smaller guppies are males but do not let this be the main deciding factor.

Step 3: Look for a gravid spot.

It is important to look for a gravid spot when trying to determine the sex of a fish. A gravid spot is found just behind the anal fin and appears to be a dark dot. It is only found in female fish, and that’s why it is considered such an important feature. This spot is dark in color and denotes a livebearer. When a female guppy is pregnant, the gravid spot will grow larger and darker and continue to do so until she eventually gives birth. Thereafter, it will shrink smaller and appear lighter in color. It will only darken again when/if she is pregnant. To see if your guppy has a gravid spot, examine the underside of the tail. If you see one there, this is a clear indication that your fish is a female.

The difference between the male and female guppy dorsal fins:

The dorsal fin is also quite an important tell-tale sign. In fact, the shape of the guppy’s dorsal fin can give away whether it is male or female quite quickly. You can find the dorsal fin situated on the very top of the guppy. It is situated back from the head by about 3 cm – more or less. The female has a short and stocky dorsal fin that seems fixed – it does not swish around when she swims. Male guppies have long “flowy” dorsal fins that move around alluringly in the water while they swim around.

The difference between the male and female guppy tail fins (caudal):

When it comes to the guppy’s tail fin, you need to take note of the shape. Male and female guppies have very different tail fins. The female does not have a very big or wide tail fin and it very rarely features colors and patterns. The male guppy may have colorful patterns and is usually quite wide and lengthy.

What is the Difference Between Male & Female Guppies

Why do guppies have differences between the sexes? What really sets the male and female guppies apart? Some would say that the biggest difference between male and female guppies is that the male seems to be designed to do the showing off (or the flaunting). Their characteristics are quite attractive and designed to catch the eye, whereas the female is not. The male features all the patterns, bright colors, and flowing fins, while the female is big and fairly plain. The male guppy is the flashier of the 2 fish.

Another interesting thing to note when it comes to the differences between male and female guppies is that the female livebearers are sometimes able to change sex. This is not something that is seen with the male guppies.

To tell the sex of your guppy, you need to take note of the characteristics of the fish. While the gravid spot is a good giveaway to look for, there are other things to note in the process. The main differences between male and female guppies are spotted in the fins, color, shape, and size. Follow the steps above closely to quickly and easily find out the sex of your aquarium’s guppies.

How do Guppies Mate?

Are Guppies as Pets Easy to Keep?