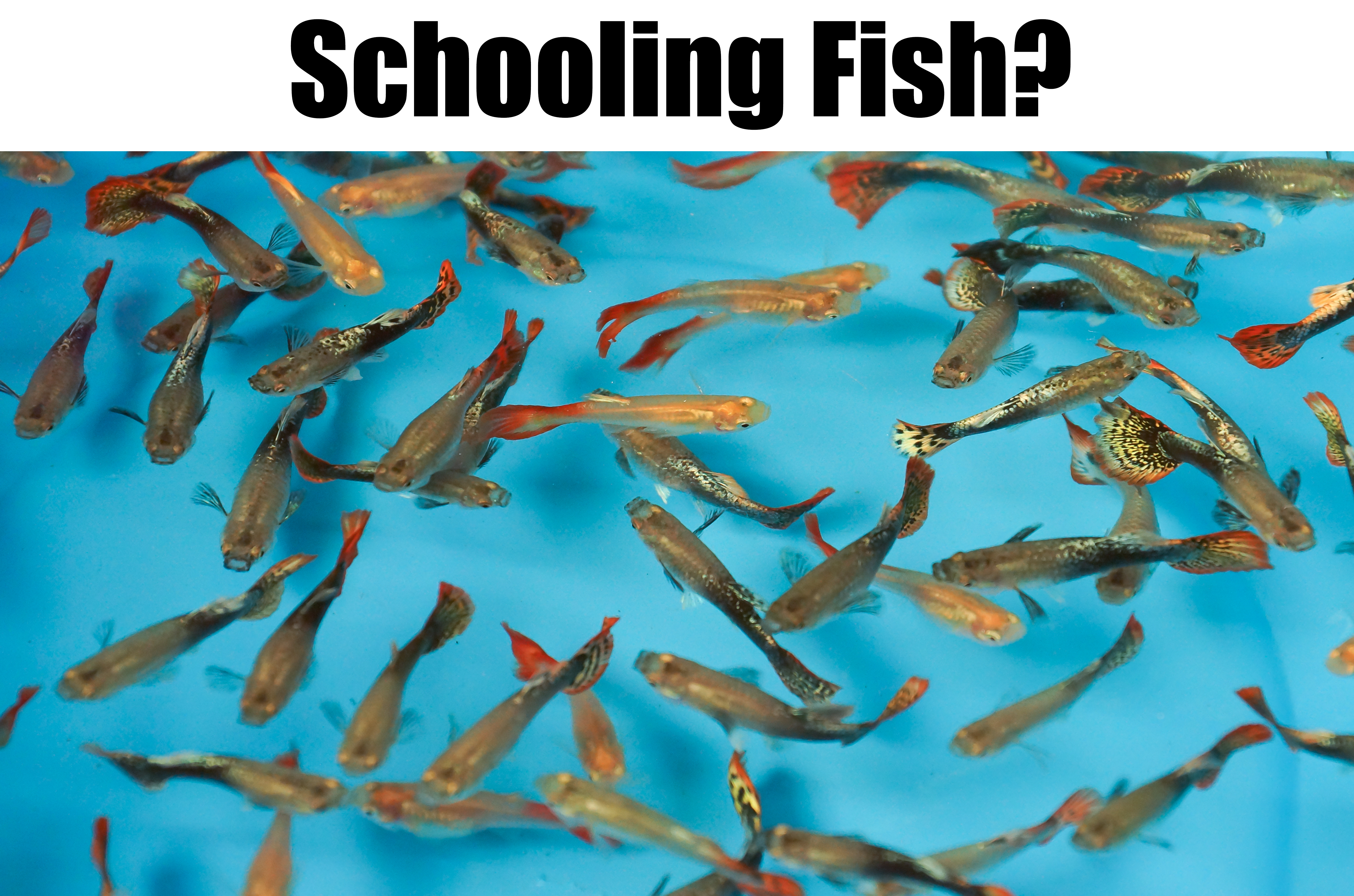 Guppies are a very popular type of fish to get as a pet. What is it about guppies that make them so popular? That one is an easy one to answer. They sport colorful bodies, they are affordable to buy, and they seem to get on well with a lot of other fish varieties. What is not to like, right? While all of this is true, some say that you need to be careful when choosing friends for them to share their tank with. The general rule of thumb is to keep schooling and shoaling fish together for a happy aquarium. That leaves the question begging to be answered; what characteristics do guppies have? Do they like to be paired with other species or do they prefer to be with their own kind?

Are guppies schooling fish? Guppies are classed as schooling fish as they can be seen schooling in a home aquarium if they feel threatened. These fish also display shoaling characteristics as they swim in social groups with others of their own kind. As both schooling and shoaling fish, they should never be kept as a single fish in a tank. They need to be kept in a group of the same species, as this is how they feel most comfortable.

That makes it somewhat simple, right? When choosing tank mates for your guppy; just choose other guppies to co-habit with it. Of course, if you want variety, you might want to know which other fish species are schooling fish and which do best, when paired with groups of guppies. I did a bit of research to make this less of a mystery for first-time fish owners. Read more about guppies, their schooling characteristics, and their care requirements below.

Schooling & Shoaling Fish – Is There a Difference?

It is important to note that guppies behave more like shoaling fish, as they like to swim in a social group while going about their business. When they feel threatened, however, they very quickly form a school and are therefore thought to be schooling fish. As you are probably now aware, schooling and shoaling are similar, but not quite the same thing. Understanding the difference is a good starting place to understand the complexities of your seemingly easy-going guppy.

Will Guppies School With Other Schooling Fish?

One of the first things first-time fish tank owners want to know is whether or not guppies will school with any other type of guppy, or if they must be of the very same species. When choosing other guppies to a group in your tank, try to ensure that they all look quite similar. Guppies will not school or shoal with other guppy species that look completely different in color, size, or shape. They tend to stick together in a somewhat “like seeks like” situation.

Some people also mistakenly believe that all schooling fish species get along with each other. This is unfortunately not true. While a guppy won’t cause a problem with any of its tank mates, whether they are schooling species or not, that doesn’t mean that they all get along. If you want a harmonious tank, it is the other fish that you need to be wary of. Some of the larger fish will eat guppies – even if they are schooling fish themselves. A good idea is to pair guppies with tank mates that are peaceful by nature or not large enough to consider guppies as prey. There are of course other schooling fish that will get along well with guppies. These are:

How Many Guppies Are Best Kept Together?

When you choose to populate your aquarium with guppies and want to cater to their schooling characteristics/traits, you might wonder how many guppies you should keep together. Should you pair guppies or should you rather opt for large groups of guppies? It is recommended to keep guppies in groups of three to six of their own species. However, you can keep larger groups, if your tank has sufficient space. Always keep in mind space requirements. A general rule of thumb is to provide one gallon of water per inch of fish. If you are a beginner with a 10-gallon fish tank, you can have around 5 to 8 guppies, but some expert fish keepers will easily, and happily, keep 10 to 15 guppies in this space.

Why Guppies Like to School | Reasons for Schooling in Fish

One of the biggest reasons that guppies are prone to schooling is to avoid predators attacking them. Avoiding predation is a very important focus for such small fish, in the tank and in the wild. When you watch guppies schooling, you will notice that if one is separated from the group, it will become distressed and do whatever it can to get back to the group.

The shape and size of your guppy’s school will vary according to the situation. The varying situations include: how many of the same guppy species are available, what the intended purpose is of the group schooling (remember, guppies usually school when they feel threatened), and of course how prolific food sources are. All of these factors will determine the shape and size of the school and how relaxed or manic the school appears. Because of this, you may notice long schools, oval-shaped schools, or oval-shaped schools.

You might wonder if your guppy is simply acting on a natural (or scientific) impulse or if schooling actually does work when in the presence of predators. Does schooling work? Yes, it actually does. While some schooling fish will be eaten while on route to their destination, it is a good general observation that schooling does make a big difference. More fish are eaten when swimming alone than when swimming in a school – and that makes sense. The concept of “safety in numbers” is definitely effective when it comes to schooling fish. Experts in the field note that there are 3 potential effects that schooling has on predators. These effects are detailed in general below:

Guppies are indeed schooling and shoaling fish. If you want your guppies to be happy in their environment, it is a good idea to provide a living space that caters to this particular characteristic/instinct of theirs by pairing them with the same species.

Can Different Types of Guppies Breed?

Can Guppies Survive in an Outdoor Pond?

What Types of Fish Can Live With Guppies?