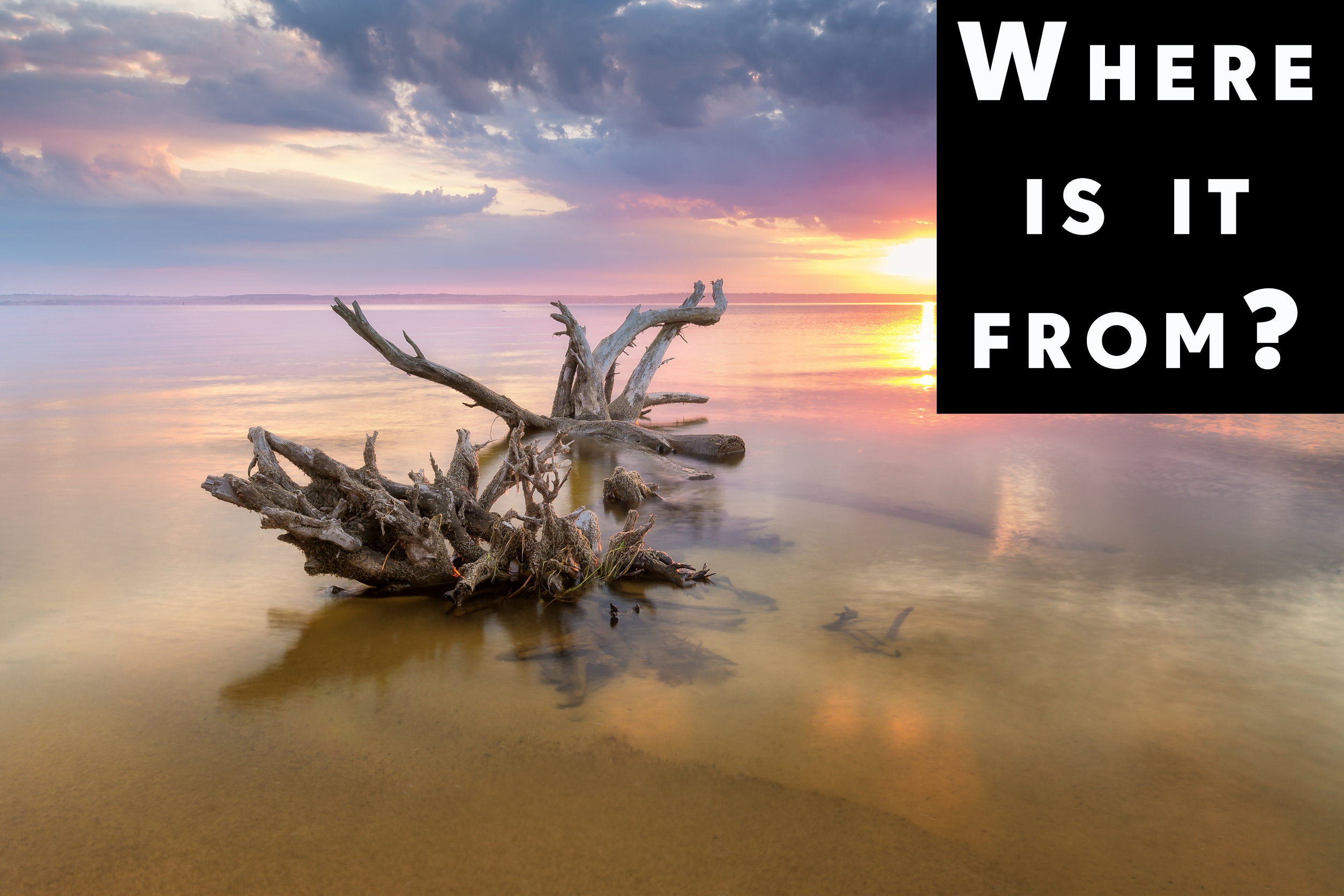 You’ve seen them–those great naturally planted tanks with driftwood as the center of attraction.  Fish seem to love them, and the people who have them in their tanks love driftwood, too.  Maybe you’ve thought about adding it yourself.

I take a look at the following regions (and the types of driftwood you can get from them) in more detail:

I also look at what makes a piece of wood “driftwood” versus just regular wood, and why it makes a difference in an aquarium.

A few common types of aquarium driftwood that come from North and South America include:

Spider wood (dried azalea or rhododendron roots) is typically sourced from the United States.  It’s called spider wood because it’s shaped like a spider with lots of legs.  It can be reddish or light in color.

Manzanita is a small tree or large shrub that grows mostly in Mexico, and the states of: New Mexico, California, Arizona, and Texas in the United States.  This is a light colored driftwood, with lots of branches or roots.

Manzanita is harder to find than many other aquarium driftwoods, which makes it a bit pricier than most.

Cholla wood is actually the dried-out remains of a specific type of cactus that grows in North and South America.  There are lots of small openings in the wood and it’s naturally tube-shaped.  Because of this, though, it could take a while for it to sink in your tank.  It doesn’t leach tannins like many other driftwoods do, however.

I look at what makes driftwood from Malaysia and Asia unique below.

“Malaysian driftwood” usually refers to many different types of wood that come from Malaysia or other parts of Asia.

It’s darker than some driftwoods out there, and comes in several different shapes and sizes.  This type of driftwood also tends to sink more easily than some of the other available types out there.

Spider wood (dried azalea or rhododendron roots) also comes from Asia, and often looks like a spider with lots of legs.

Another continent local fish stores get their driftwood from might surprise you.  Most of us don’t think of Africa as a place with a lot of driftwood!

African driftwood is usually taken from tree roots from hardwood trees, and isn’t found floating in water.  This type of driftwood (which really doesn’t fit the definition of driftwood), is also called Mopani wood.

Mopani wood is unique in that it has two colors on the same piece of wood–light and very dark, in interesting patterns.  Another thing to know about Mopani wood is that it will sink without needing to be pre-soaked or boiled first.

It’s usually sand-blasted to remove the bark before being sold at local pet stores.

Finally, I take a look at where you can find wood in your local area and what you need to do to make it safe for your aquarium.

Of course, you can always go hunting for driftwood where you live.  If you choose to do this, just know that some types of wood aren’t suitable for use in aquariums, such as:

Yew, lilac, and ivy are actually toxic to fish, and should never be used in an aquarium.  That’s because these types of trees can leach harmful chemical compounds into your aquarium’s water.  Pine trees and other conifers could still have sap and resin inside, which would be harmful to the fish, as well.

Grapevine, while not harmful to your fish, will rot pretty quickly in an aquarium, and typically, when someone adds driftwood they don’t want it rotting down to anything not long after it’s added to the tank.

You should also know that prior to adding any “found” driftwood to your fish tank, you’ll need to clean it to remove exterior mold, fungus, etc., boil it (or soak it for several days), and then dry it before it’ll be safe to add to your tank.  This process is called “curing” the driftwood and makes it safe for your tank and the tank’s inhabitants.

Now that I’ve looked at where driftwood comes from, I share what it actually is, and how aquarium “driftwood” doesn’t always meet the definition of what driftwood is.

What is Driftwood, Anyway?

What makes driftwood so much more special than any other piece of wood?

Normally, the term “driftwood” is used to refer to any piece of wood from a tree or bush that has broken off the tree/bush it was on and ended up in a river, lake, or even the ocean.  It got its name from drifting on the water current.

So, a broken off branch in your yard or even in a forest isn’t normally called “driftwood,” because it isn’t floating around in a body of water.

And most driftwood has been worn down by the elements and often bleached by the sun, depending on how long it’s been on the water.  A lot of times, driftwood washes on shore or gets stuck along muddy river banks, making it easier for beachcombers or driftwood collectors to take with them.

In aquariums, however, roots (like azalea roots, also called spider wood) are often used as driftwood, too.

And, interestingly enough, much of the wood used for aquariums hasn’t been floating anywhere or seen much weathering.  For example, mopani wood is taken from African tree roots.

But, besides making your tank look nice, can driftwood actually benefit your tank?

What Does Driftwood Do?

Many people add driftwood to their aquariums because it looks good, but did you know that driftwood also does several other things in an aquarium?

Yes, some fish will nibble on the driftwood in your tank.  But, don’t worry, it won’t hurt the fish and will even provide them with some nutrients.

Not only that, but driftwood can provide a home for algae that your Oto cats and other algae eaters will love.

But that’s not all driftwood does–it can increase your beneficial bacteria,too.

Providing a Place for Beneficial Bacteria

Because driftwood has so many surfaces, it’s a great place for the beneficial bacteria in your tank to grow.

Driftwood also leaches tannins into the water, which has its own benefits.

Tannins naturally lower the pH in your tank, making the water slightly acidic.  This can be good or bad, depending on the type of fish you have in the tank, and what types of plants you’ve got.  Some fish prefer slightly acidic water and may be thanking you for adding the driftwood!

They can also make the oxygen in the water easier for your fish to take in, letting them breathe easy in your tank.

Another benefit to tannins is that most fish viruses and harmful bacteria don’t like slightly acidic water as much as they like neutral or alkaline water, and will have a harder time surviving, meaning healthier fish for you.

In addition to all of its health benefits, driftwood also makes fish feel more at home in your tank.

Because driftwood is a natural part of the environment that many fish live in out in the wild, it makes them feel right at home in your aquarium.  They can also have several places to hide, depending on the shape of your driftwood, which will make shy or territorial fish happy.

The driftwood for sale online or at your local fish store comes from three main regions:

If you’re willing to do a little extra work, you can even hunt for driftwood nearby if you’re close to a water source, like a river, ocean, or lake.  But you should be careful about adding driftwood to your tank since certain plants can be harmful to the tank.

These include plants like yew, lilac, conifers, and ivy.  And if you do add driftwood to your tank that you’ve found on your own, you’ll also want to cure it before adding it to your aquarium.

Technically, driftwood is a piece of wood that’s been floating in water (usually the ocean, a lake, or river).  However, the “driftwood” used for aquariums can come from roots and even land-locked trees that have probably never been anywhere near an ocean or other body of water.

Adding driftwood to your freshwater aquarium also has several benefits, including providing safe hiding places for fish, making it easier for fish to access the oxygen in your aquarium’s water, and creating a slightly acidic environment (which can help keep harmful bacteria and viruses down), and even acting as a source of food for some fish.

Why is Aquarium Driftwood Expensive?

How much do Fish Tanks Weigh?