On any average stroll down your local fish store’s aisles, there’s one popular fish your almost always guaranteed to find. The neon tetra. These fish are so loved because of their gem-like colors and their ability to fit in with most other species of fish. Because of its characteristic bright colors and horizontal stripes, the neon tetra is one of the most beloved fish among aquarium hobbyist. This fish is so popular that nearly 2 million are sold in the United States alone each month.

They’re peaceful and easily available. It’s easy to see why as they are fairly easy to keep and make great additions to any freshwater community tank. The neon tetra is a small but hardy shoaling fish originating from the warm rivers of South America. First discovered and exported in the 1930’s, its trip to the United States is likely the most expensive fish transport recorded, costing nearly $3000 at the time.

My eye is always naturally drawn to the neon tetras beautiful coloring anytime I’m pacing the aisles of a fish store. I’m always drawn to them not only because of their behavior but because of their beauty. They’re mighty beautiful for such tiny fish. There are many varieties of tetras, but neon tetras are unique from others. They have beautiful distinctive markings.  They have the most beautiful teal stripe that reaches down the length of their body, and a red stripe beneath that one. This signature color combination makes them easily identifiable. I like to keep their tanks a little more planted and dimly lit, as harsh tank lights can stress them and cause their colors to dull.

Neon tetras are very small after hatching. So small, they often become fish food to larger fish in the wild. If they survive the fry hood they grow very quickly though and get their adult coloration around one month of age. They typically grow to be about 1.5” in length, but they can top almost 2.5” occasionally. Female tetras are usually smaller than males. Their bodies are also rounder and their blue striped is usually slightly curved. Males usually have slender bodies and their stripes are straight. Sometimes a male who has overeaten can be mistaken for a female neon tetra.

Omnivores by nature, in the wild, neon tetras eat algae, small invertebrates such as brine shrimp, and insect larvae like bloodworms. In an aquarium setting their natural diet can be copied by feeding a high-quality fish food. Many commercial foods include natural color enhancers to keep the fish looking bright and healthy. They will eat flakes if they are small enough for them to swallow. Because of this, I like to feed my tetras a micro pellet food. These are small and perfectly sized for their tiny mouths.

To mimic their natural food source, you should also offer small foods such as bloodworms, brine shrimp, daphnia, and tubifex. These can be either frozen or freeze dried. They won’t care either way, they’ll just be happy they are getting such a great treat!

Neon tetras also like snacking on veggies such as zucchini. To serve veggies, just blanch them in boiling water for about a minute and cool before putting one or two small pieces into the tank. When the fish are finished, be sure to remove any extra.

As with most other fish, neon tetras should be fed once a day, feeding only as much food as the fish will consume within 3 minutes. Feeding more than this can lead to unstable water parameters and cloudy water. I even like to sometimes vacuum up excess food just to be on the safe side.

In the wild, neon tetras live in warm temperate rivers. They tend to stay in the dark waters that are shady and crawling with dense plant life.  It is important to keep a fish’s natural habitat in mind when thinking about how to set up a tank for them. It needs to mimic their natural home as much as possible in order for the fish to not get stressed.

The absolute first thing to consider before getting your neon tetras is what size tank you’re going to set up. Choosing a tank can be daunting. It’s also important to think about where you’re going to put the tank and what kind of animal is going inside the tank, as different fish like different tank types. Some like a tall and narrow tank, while others prefer a short but long tank for lots of swimming space. I feel the need to share two things with you up front about fish tanks:

Neon tetras may be tiny, but they still need an adequately sized tank for many reasons. First, they are fish meant to be kept in groups. These groups of fish need plenty of space to swim together. Second, although it might seem opposite, a larger tank is actually easier to maintain because it will require smaller water changes, and it will hold its cycle better. 10 gallons would be the absolute minimum size, but for the sake of the fish a 20 gallon or larger tank would be best. This will give the fish plenty of space. Be sure to also think about where the tank will go. It should be out of direct sunlight and the floor beneath the tank should be sturdy. There should also be a stand that is strong enough to hold a constant high amount of weight. You also want the tank to be somewhere not too noisy, and out of the way enough that you don’t have to worry about the kids or dogs accidentally hitting it. That could spell disaster for both your fish and your floor!

Before adding any fish to the tank, the water and substrate should be added, and a cycle started. Once the water parameters are optimal then you can slowly begin acclimating the fish by floating their bags on top of the tank to equalize the water temperature, and slowing adding small amounts of tank water to the bag with the fish to get them used to the pH.

As far as water conditions go tetras tend to be fairly hardy fish, which is why they are often sold to beginner hobbyists. Although they are usually classified as tropical fish, they are actually from what’s called the Neotropic ecozone of South America. They do best in water between 70 and 80 degrees. This makes them a great match for tankmates who like tropical waters.

Neon tetras are freshwater fish, and cannot survive in a saltwater tank. Adding to much aquarium salt to your tank to treat illness can also harm your fish. Also, be sure to thoroughly clean any decorative items that may have come from a saltwater tank. Neon tetras prefer a slightly acidic habitat with the pH kept between 5 and 7. being in alkaline water won’t kill them, but it can interfere with the breeding process and leave them more likely to become ill.  The fish also require soft water, so it’s always wise to check your water source and plan appropriately.

These little guys can very easily be swept up into the filtering equipment on the tank. It might be best to find a way to use a No products found. or mesh to provide some kind of barrier between the fish and the filter.  It’s also important to have a heater in the tank if the water is not holding a steady comfortable temperature for the fish.

Tetras like to be in a densely planted tank. They like having green vegetation, plants, and branches in their tank. They don’t like bright light so lots of plants filtering their tank lights will keep them happy. They also enjoy having many nooks and crannies to hide in so any type of décor that offers hiding spots will do. Try not to overload the tank though. Neon’s need plenty of room to swim so place larger plants in the rear of the aquarium, and don’t put too many large items in the tank. I suggest using a black substrate to help absorb tank light. It also looks really nice against the green background of the tank. 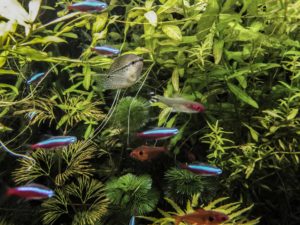 Neon tetras are so popular among hobbyists because they fit in well in just about any established tank. These fish do best in a community tank, and should be kept in groups of no less than 6. they are peaceful and non-aggressive. Any less than that and they can begin to feel threatened and stressed by the other fish. Because neon tetras tend to hang around the middle of the water column, they do best with surface fish and bottom dwellers, though they do just fine with other middle dwelling fish as well. It can be a good choice to keep a school of another type of tetra in the tank. Some tankmates you might consider are:

You definitely will want to stay away from cichlids. Most are much larger than neon tetras and will make a quick dinner of them, not only are they larger they’re known for their aggressive behavior. When put in a tank with tetras (or mostly any other fish) they will often just chase them and nip them.

How to Keep Neon Tetras Healthy

In the wild these hardy little fish are known to live up to 10 years, however in an aquarium setting they rarely ever live this long. There are quite a few diseases and ailments that neon tetras are known to get. Let’s discuss them below.

Neon tetras may be a good fish for beginners to keep, but they tend to not be the easiest fish to breed. This is because neon tetras need very precise water parameters to urge them to spawn. Some people like to simulate their natural habitat, and perform a large water change to imitate a rain, and darkening the tank. After the males have released their eggs, and the males have fertilized them, remove the adults from the tank to prevent them from eating the fry after they hatch. Breeding tetras can be tricky, and take some practice to get the conditions just right for them.

These little freshwater fish often get confused for other types of tetra because most people don’t realize just how many different varieties of tetra there are. There are over 150 different types! There are even other fish called neon tetras, but they are of another species entirely. Neon tetras are also a part of the piranha family. They also enjoy the company of other fish. In a tank where there are too few tetras, you might notice your neon tetras schooling with other similar looking fish like glowlight tetras.

The neon tetra is easily one of the most beautiful and popular fish among both beginner and experienced hobbyists. Their high activity paired with their peaceful nature make them a great addition to any tank. They are a great fish to get started with as someone new to the aquarium hobby.  Anytime I set up a new community tank, it’s almost a guarantee that neon tetras will find their way into it. These little guys seem to have a personality that can keep you staring at them for hours. Whether you’re just getting started with your first aquarium, or you’re setting up your tenth, neon tetras will make a great addition, and add a colorful splash.