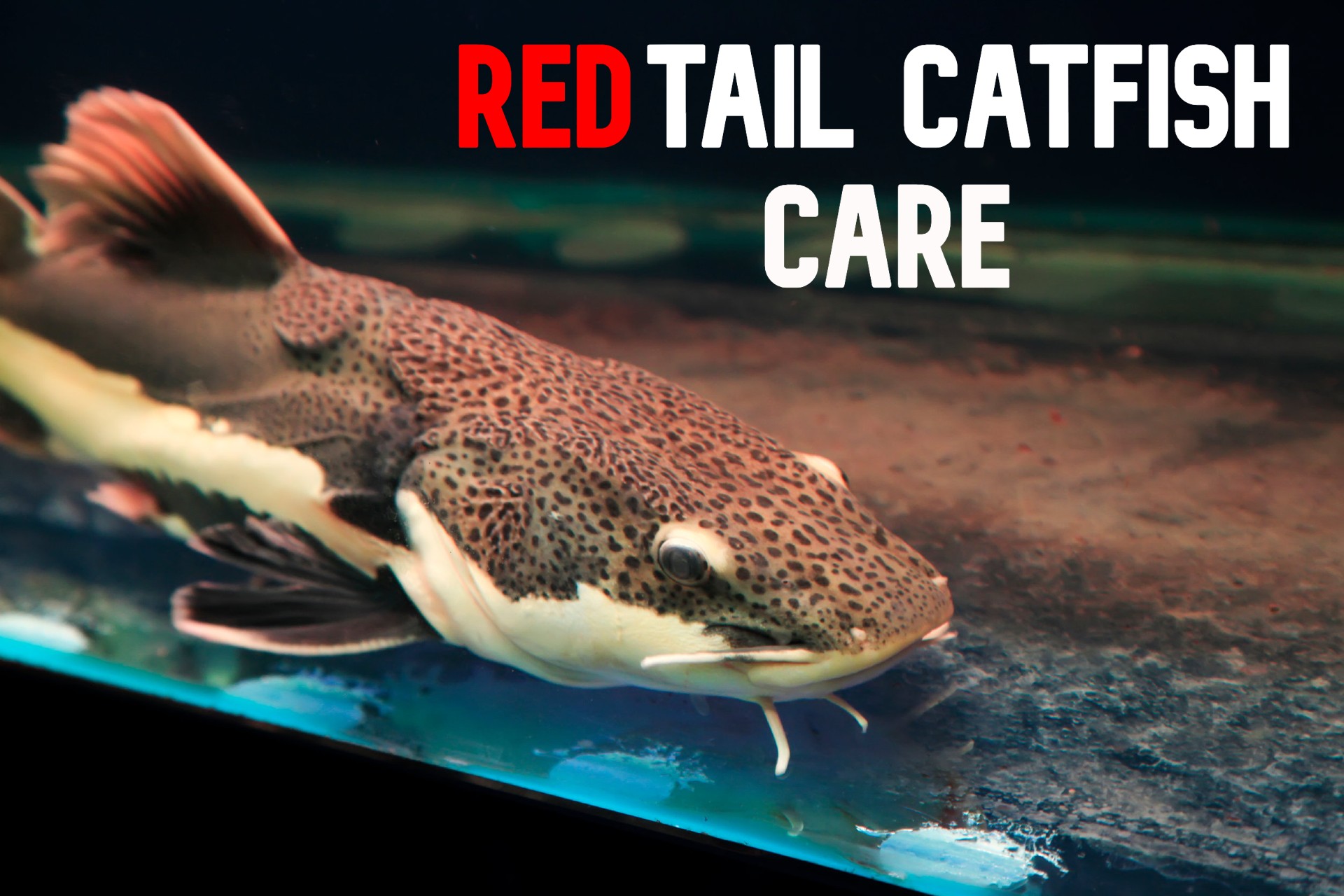 Red Tail Catfish (scientific name: phractocephalus hemioliopterus) are amazing creatures! These long whiskered fish can be found mainly in Colombia, Venezuela, Brazil, and Peru around Amazonian river basins. They can grow to amazing sizes, too, with the largest Red Tail caught weighing at 123 lbs and 4.62 ft long!

RedTail Catfish do best in extremely large aquariums (about 3,000 gallons) with enough room to grow and swim. They require feedings of live, meaty foods like shrimp and mussels, and fresh fruit and vegetables once a week. They exist best in dark, murky atmospheres.

While fantastic fish to own, Red Tail Catfish can become difficult and expensive to house due to their size and eating habits. Only owners willing to maintain tanks around 3,000 gallons or large, temperature maintained outdoor ponds should own them.

The Diet of a Red Tail Catfish

RedTail Catfish are larger fish, and therefore require a lot more protein than your average aquarium fish. They are also omnivores, meaning that they LOVE to eat whatever they can find and will spend a significant amount of time searching around for food.

This includes using their whiskers to sense nearby food or a meal that has drifted to the bottom of their tanks, as they would in the Amazonian rivers. The chemoreceptors on these whiskers can sense the chemicals and will guide them towards their next meal, whether that’s live fish or fruit that has fallen into the water.

Something to note when owning catfish is that they can often overeat, and require time after each meal to properly digest their food. While juvenile Red Tails should be fed every other day, it’s best to feed mature catfish only one large meal per week.

If you feed them too much or too often, they will become sluggish and inactive, which can become a problem. Simply just watch them and make sure that they aren’t too lethargic.

It’s also important that their bellies are always bloated, and never sunken in, as this could mean that they are hungry and sick.

With a Red Tail Catfish, you can get pretty creative with their diets. They do best on a mixture of meatier items like cut meat and fish, cockles, mussels, lance fish, crayfish, earthworms, shrimp, prawns, and other proteins. It’s important that they DO NOT eat mammalian meat such as mice, though, as they can easily spread disease.

You can also feed them fresh fruit and vegetables, and even frozen food, flakes, or pellets. Anything containing carotene (i.e. a red, yellow, or orange color) can enhance its color by adding more pigment to it. So feeding them lobster or shrimp will help them become more colorful.

Something fun about catfish is that they can also be trained to feed out of their owner’s hand. This is because they don’t have teeth and have particularly largemouths. Just be sure to not touch their whiskers too hard, as they are extremely sensitive, and to not give them too much in one feeding.

Red Tail Catfish can grow up to 5 ft. in the wild! This is because they have plenty of space and food to support this growth. Though in aquariums it’s average they only reach about 3 ft. This is still an extreme in the world of home aquariums, as your regular fish will be about one-tenth of that size.

Since the average home aquarium is around 20 x 10 x 12 inches, it’s simply not large enough to house a Red Tail, especially if you’re thinking of getting more than one. So they really should ONLY be purchased by owners that have enough space, whether that be an aquarium that is larger than 3,000 gallons or a pond, which can become expensive to heat properly.

They also are used to warmer weather, so they need to be in an environment where the water is naturally 68-79 degrees Fahrenheit or somewhere where the water can be heated to that temperature. Since this tank size and the heating bill can become expensive as well, be sure to look at your overall finances to make sure that you have enough money to last fifteen years (sometimes even twenty,) as that is the average lifespan of one of these creatures.

That also doesn’t even include the filter required for a tank or pond that large. Seeing as Red Tails are voracious eaters, they will require a lot of filtering in their environment to make up for how much waste they produce. They exist best in water that has a pH balance of below seven.

It’s also important to remember that they will eat anything in sight, so keeping small and indigestible décor in your tank is a no-no. Instead opt for large, smooth rocks, and bark wood that isn’t at all sharp. Like a lot of other fish, they also love hiding spaces, so it’s better to get fake plants that are soft to the touch that you can create hiding places with.

They are especially known for their bright colors, which are rare in fish that originate in the darker waters of the Amazon. Since they are a larger predator they don’t need to camouflage themselves as much as other, smaller fish. They also are famous for the clicking noise that they produce in their aquariums as a way of warning off potential dangers.

Beyond the gargantuan needs in terms of tank size and heat, these fish require a moderate level of care, including regular cleanings for their tanks of soft or neutral water.

In terms of tank mates, you need to keep in mind that the Red Tails are natural predators and will attack smaller fish. So it’s best to carefully consider different tank mates before purchasing any.

Instead opt for fish that are larger than a Catfish’s mouth, generally.

The Health and Lifespan of a Red Tail Catfish

Red Tail Catfish are survivors and can withstand being sure to watch them and lookout for signs that they are eating enough, not eating too much, and that aren’t breathing too hard. This can mean that their water is not filtered enough and they are starved for oxygen which can cause a lot of problems for them in the long run.

Red Tail Catfishes are considered to be hardy in nature with rare chances of diseases. That doesn’t mean that you shouldn’t take precautions, though.

High nitrate levels can cause infections on the barbels, which can make it hard for them to eat and navigate. It’s also best to use medications with caution, as they are scale-less fish. This means treating them with melafix and pimafix. NEVER use copper-based medication or potassium manganate.

Overall, keep them stress free and you won’t have to worry about diseases.

This means cleaning things you put in your tank and keeping the water clean, fresh, and at the right pH balance and temperature. Also, give them areas where they can escape from human sight for a while. Like a lot of fish (and humans) they need their alone time, especially if they are juvenile.

So, while they are still young, it’s a great idea to install PVC pipe at the bottom of your aquarium that will allow them a maze of hiding places.

It’s also important to realize that there haven’t been any documented cases of Red Tail Catfish being bred in captivity without external hormones being used.

This is partly due to the fact that they are extremely territorial, and picky about mating in certain atmospheres. It’s also due to the fact that males and females are hard to differentiate, and along with their size, it’s not easy for fish breeders to breed or maintain Red Tail Catfish.

Red Tails can live up to twenty years in captivity.

That’s a LONG time for a fish this big to be existing in a small space so DO NOT buy or adopt if you do not have the resources or space. It can be deceiving to buyers who see a five-centimeter baby catfish to imagine that they could get so big.

But it’s common for them to grow an inch a week when they are young and to be able to reach two feet within a year. On average will grow more than 3 ft. in their life with ease.

If you have the means, the money, and the love of catfish that it will take to properly care for them, though, they can be quite the conversation starter. Catfish are rare in the aquarium world, and owning one will put you on a list of very few home aquarists who could be considered professionals. They will always be able to add a bit of beauty and diversity to your collection.

To see just how big red tail catfish can get, click on the video below: