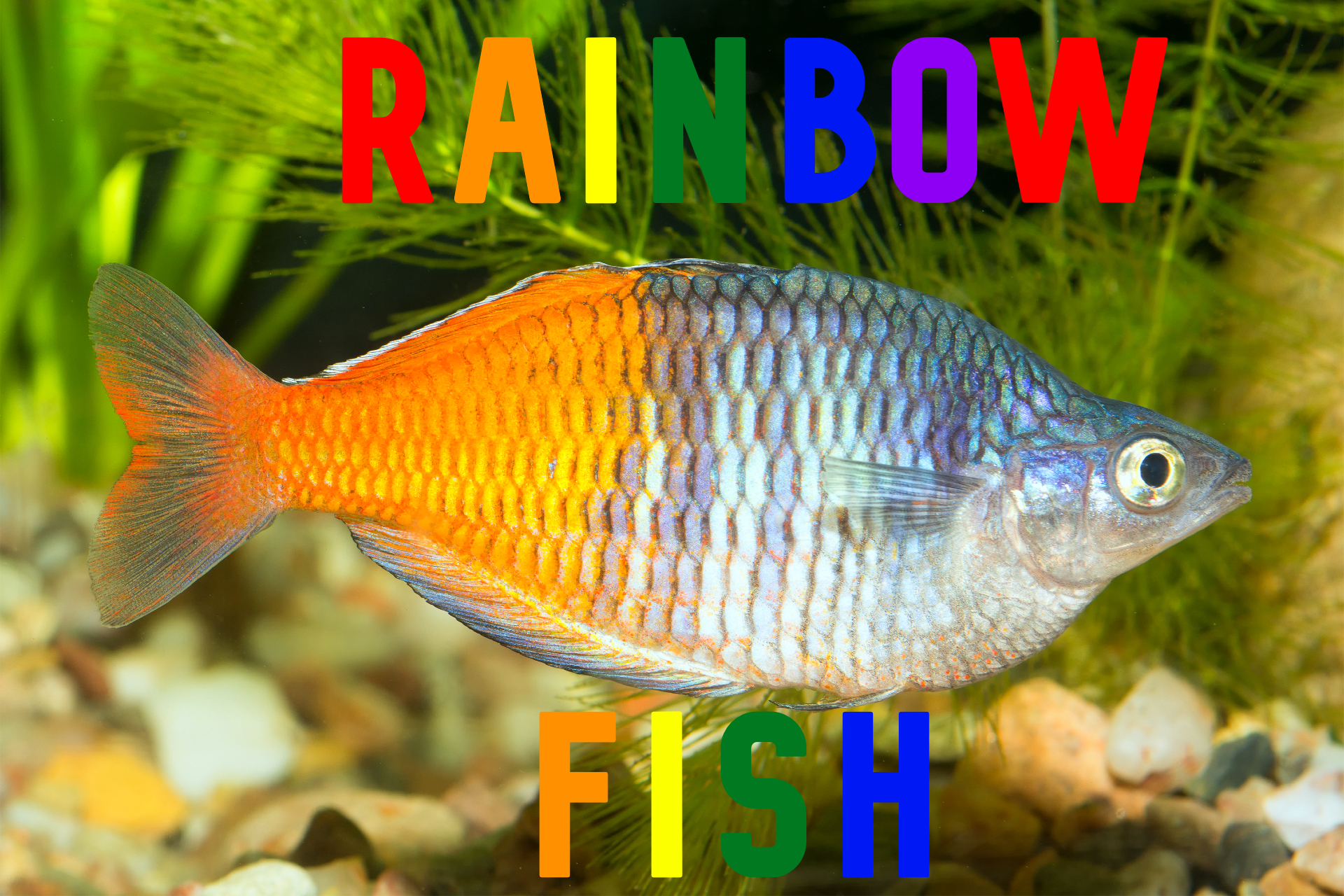 Rainbow fish are easy to take care of when following the correct tank specifications of at least ten to fifty gallons and feeding the fish green vegetables and protein. They are social creatures that stress easily, so having a few tank mates will be beneficial to their health.

First, it is important to note that there are over fifty different types of rainbow fish out there. The various subfamilies have specific needs in regards to water specifications and diet, so it is crucial to know the exact type of rainbow fish you have before filling the tank or buying the fish food.

Rainbow fish are native to Australia, Papua New Guinea, and parts of Indonesia. They are freshwater fish, so they are typically found in streams, rivers, lakes, and swamps.

Because of new invasive species and increased human activity, rainbow fish are endangered. To help with the population, most rainbow fish are now produced commercially on farms in Southeast Asia and Florida.

These are just a few examples of the types of rainbow fish.

There are slight differences and preferences that your type of fish could have, so make sure to do your research before you buy a rainbow fish and the supplies with it.

In the wild, rainbow fish will eat both plant and animal matter. Rainbow fish are surface feeders, meaning they will not eat anything that is on the floor of the water they reside in. They will usually eat things in the top few layers of the water.

When you own rainbow fish, it is important to feed them often because they are surface feeders. A trick when it comes to feeding your fish is to only give them food they can consume in under two minutes. This amount is enough for your rainbow fish and will not let the food go to the ground, polluting the water and making the tank a mess.

You should feed your rainbow fish once or twice a day.

Another thing that is important to note about the diet of rainbow fish is to rotate their meals.

For example, if you feed your fish vegetable matter one day, you should feed them a meat-based meal the next day. The variety is good for your rainbow fish because it allows for higher levels of nutrition and will keep your fish healthy.

What to Feed Your Rainbow Fish

The best option for your rainbow fish should include both vegetable and meat sources. Fish flakes are easy because they mimic the natural feeding patterns of your fish.

You can also feed your rainbow fish ground vegetables and frozen shrimp. Before you feed your fish anything frozen, make sure the meat is thawed.

The tank you choose is important because it is going to be your rainbow fish’s home! It can be overwhelming because there are many different options for tanks, but do not worry. Keep reading and you will learn everything you need to know about the fish tank you need for your rainbow fish.

Since rainbow fish live in freshwater such as lakes, rivers, and streams, their tank should match that environment. This means warm water that is sometimes hard and alkaline.

Rainbow fish are fast swimmers so they need plenty of space to swim around. They are social creatures and do better in a group of six or more, so you will need a larger tank, depending on the size and number of fish you plan on having.

The tank size, depending on the species, for your rainbow fish needs to be between ten to fifty gallons.

Rainbow fish typically live in alkaline waters, but since more and more fish are bred commercially, they can tolerate a wider range of water conditions. They adapt easily, but it is still important to note the conditions needed for rainbow fish to survive.

Since rainbow fish are used to warmer water, the temperature in their tank should be anywhere from 74 to 78 degrees Fahrenheit/23 to 25 degrees Celcius.

Madagascar Rainbows come from more acidic water, so their specifications for their water should be 74 to 80 degrees Fahrenheit/23 to 26 degrees Celcius with a pH of 6.5 to 7.5 and alkalinity between 3 and 14 dKH (or 55 to 250 parts per million).

Telmatherinidae like brackish water, so adding aquarium salt to their water (if their tank mates can handle it) is a good idea. Their tank’s temperature should be 72 to 82 degrees Fahrenheit/22 to 27 degrees Celcius with a pH range of 7.0-8.0 and a hardness of 10-20 dGH.

If the room your tank is in falls less than 74 degrees Fahrenheit, a tank heater could be beneficial.

It is important to check the water and filter daily to make sure everything is working properly.

Every week there should be a 10% water exchange or 25% every two weeks. This change is done with a water change or a vacuum gravel cleaner. You should treat the tap water before refilling the tank.

Rainbow fish are usually shy, but are social and thrive in groups of six or more.

They stress easily, so it is important to make sure to not introduce any stressors, such as slow fish, unknown fish, or threatening fish.

Male rainbow fish tend to compete with each other if there are not enough females during mating season, so there should always be more females than males.

Male rainbow fish also show bright colors to attract attention, which can be quite beautiful.

Here is a list of great tank mates for rainbow fish:

While rainbow fish need companionship, they aren’t great with all freshwater fish. Make sure to avoid:

How to Know Your Rainbow Fish is Healthy

A healthy rainbow fish will have clear eyes, a healthy appetite, and undamaged fins. Their colors are typically brighter when they are healthy.

Rainbow fish do like to hide, so do not worry about their health if they are hiding. This is usually a good sign.

Another sign of the disease is if their behavior is off. They will swim around less and eat less if they are sick.

Also when they are sick, there could be spots of fungus on their mouth or body and their fins could fall off. This is called fin rot, which is one of the most common diseases in rainbow fish. Fin rot is caused by poor water quality and is treated by a veterinarian.

Another disease that is common in rainbow fish is called ich. This happens when fish live in close quarters. A rainbow fish that has ich will have white spots on their bodies and fins. They will also rub against hard objects like they are trying to scratch an itch. The cure for ich is quarantining the sick fish and applying a commercial remedy for about two weeks.

Rainbow fish are fairly easy creatures and are beautiful as pets because of their bright colors. They can live up to five years if taken care of properly.

It is important to check on them daily for diseases and keep their water clean and at the proper measurements.